General Hospital (GH) Spoilers: Who Will Nina End Up With? 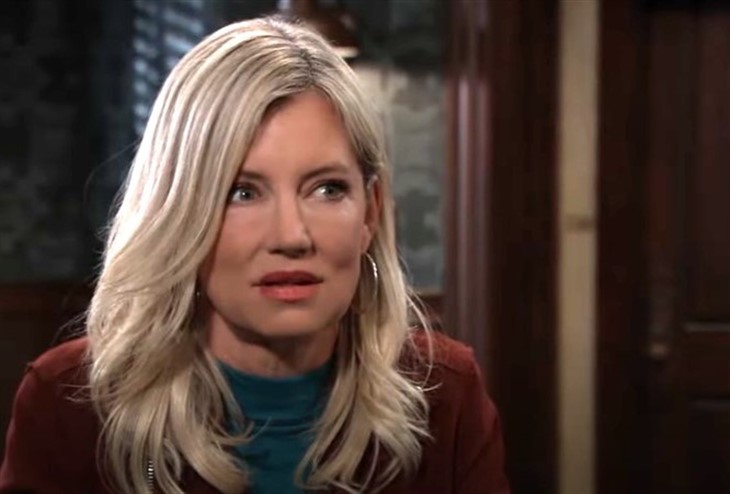 General Hospital spoilers tease Nina Reeves (Cynthia Watros) is not in a relationship at this time. Nina is the editor of Crimson magazine. She is a respected part of Port Charles society and has a family that loves her.

Recently on General Hospital, Nina found out that Nelle Benson (Chloe Lanier) was her daughter. Nina should be happy to find her long-lost child but she could not be a part of Nelle’s life because she is dead.

General Hospital recaps show Nelle left behind a son Wiley Quartermaine-Corinthos (Theodore and Eric Olson). Nina wants to get to know her grandson but his father Michael Corinthos (Chad Duell) and adoptive mother Willow Tait (Katelyn MacMullen) are reluctant for Nina to get close to Wiley. Nina has left Port Charles to clear her head. She is also trying to find a way to heal her broken heart.

Nina had been in a relationship with Jasper Jacks AKA Jax (Ingo Rademacher). They had been a happy couple until Jax and Carly Corinthos (Laura Wright) began to suspect that Nelle was Nina’s daughter. Jax and Carly decided to keep the information from Nina because Nelle had been a troubled woman and she had died. They knew the way that Nelle had died and kept that from Nina as well. Nina was devastated that Jax had kept the secret about Nelle from her. She ended their relationship. Jax still cares about Nina and wants to get her back. Can Jax find a way to get Nina to forgive him and start over?

Nina had been in an on-again and off-again relationship with Valentin Cassadine (James Patrick Stuart). Nina loved Valentin but secrets kept driving them apart. Valentin knew that Nina wanted to find her long-lost daughter. He arranged for Sasha Gilmore (Sofia Mattsson) to pose as Nina’s daughter.

Nina was happy to be a mother to Sasha. However in the end Sasha confessed to Nina that she was not her daughter. Then Nina found out that Valentin had brought Sasha in as her daughter. According to GH recaps and spoilers, Nina ended her relationship with Valentin. However, Valentin still loves Nina. Will Valentin find a way to win Nina back now that she and Jax are separated?

Nina left Port Charles to visit her friend Phyllis Caulfield (Joyce Guy) in Nixon Falls, Pennsylvania. Phyllis had been the nurse who gave Nelle to her adoptive family. Nina was able to find out that Nelle was her daughter with Phyllis’s help. Nina went to see Phyllis tell her about her troubles when she found Sonny Corinthos (Maurice Benard).

Currently, Sonny has been declared dead by his family. He has amnesia and has been helping Phyllis and her husband Lenny Caulfield (Rif Hutton) at their family business The Tan-O. Nina was shocked to find Sonny and wanted to tell Carly that Sonny was alive.

However, General Hospital spoilers show Carly told Nina that she could not see Wiley. Nina was upset and now does not know what to do with the knowledge that Sonny is alive. Nina has agreed to stay to help Phyllis and Lenny to promote Nixon Falls and The Tan-O with an article for Crimson. Nina is getting close to Sonny. Will Nina start to fall in love with Sonny?

General Hospital spoilers tease Nina is not sure what she wants in regards to her love life. She still has strong feelings for Jax and Valentin. Nina believed that Jax was going, to be honest with her. Can Jax prove to Nina that he is the honest man that she fell in love with? Nina still feels connected to Valentin.

Can Valentin win Nina back by not keeping secrets from her or deceiving her again? Nina has found a friendship with Sonny. Could Nina find a fresh start with Sonny or would she lose him when he remembers who he is? Tune into General Hospital to find out what Nina does to find someone to love.

Let us know what you think in the comments below.  Check Hollywood Hiccups daily for more General Hospital spoilers and soap opera news.