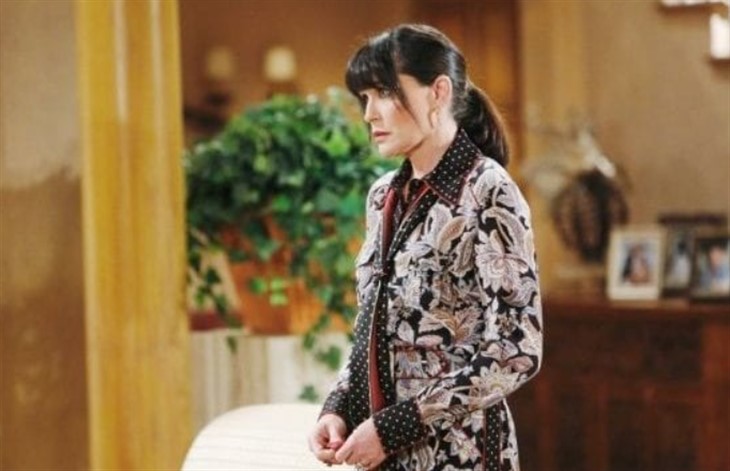 The Bold and the Beautiful (B&B) spoilers document that Quinn Fuller Forrester (Rena Sofer) inexplicably inserted herself into Zoe Buckingham’s (Kiara Barnes) fragile world. As fans saw, Quinn overheard a conversation between two sisters and sensed something was off.

Zoe was willing to engage Quinn’s interest. Then, Sofer’s character offered a wink, which allowed Zoe to pull what is a modest prank on Paris Buckingham (Diamond White). However, this effort was mean-spirited and projects badly into the near future.

The Bold And The Beautiful Spoilers – What Is Zoe Buckingham’s Problem?

In two words, sibling rivalry. Two others, petty jealousy, would also be sufficient. Although one adjective, selfish, might describe Zoe most succinctly.

The Bold And The Beautiful (B&B) Spoilers: Hope Asked To ID Body, Is Thomas The Murder Victim?

Zoe’s problems are many. But one could be addressed in order to help her achieve personal growth. She needs to stop blaming Paris and take personal responsibility.

Carter Walton (Lawrence Saint-Victor) did not end Carter’s engagement because of Paris. He canceled his plans to marry Zoe because she had open eyes for another man. Zoe’s disrespectful behavior continues to blind her to reality.

So, it was no surprise that Quinn encouraged Zoe to alter Paris’ reality without her permission and with no thoughts of that person’s well-being. White’s character was heading out on a date with Zende Forrester Dominguez (Delon de Metz), which Zoe rationalized as a provocation to do what she did.

Here’s hoping that Paris recognizes her sister’s unholy nature. She’ll need to in order to survive additional practical jokes that could go farther than this one. It’s hard to argue otherwise, based on Zoe’s unsteady history.

The Bold And The Beautiful (B https://t.co/beo4QQ0SAf #BB #Bold #BoldAndTheBeautiful

No two points are exactly comparable. But it’s reasonable to believe that Quinn triggered herself in subconsciously comparing herself and Zoe and to see similarities between Brooke and Paris.

Quinn and Brooke certainly aren’t sisters, unless a soapy reveal eventually makes that true. But they surely are rivals.

Eric separated from Quinn because she worked hard to break Bridge. Sofer’s character better hopes that her husband doesn’t learn what she did to the sweet person who sang an angelic song at the Forrester’s Christmas party. He won’t be happy and Quinn would, once again, have no truthful explanation to offer for her reckless behavior.