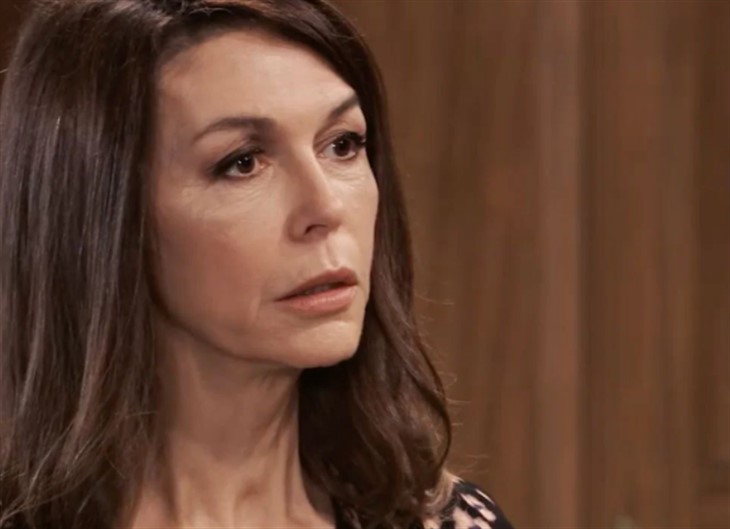 General Hospital (GH) spoilers tease that in Port Charles, NY Anna Devane (Finola Hughes) will be horrified to find out what Peter August (Wes Ramsey) has done now, in a future episode of General Hospital!

General Hospital Spoilers – Peter August Tried To Make A Deal With Anna Devane And Valentin Cassadine, They Didn’t Go For It

General Hospital viewers will recall Peter tried to make Anna and Valentin an offer, they didn’t go for it. Peter then proceeded to make a veiled threat and continued to taunt Anna that he’d never be taken down! Anna and Valentin were not going to let Peter continue to go on his merry way without consequences.

Valentin has regretted that he did not include the concept of consequences in his mentoring of and watching over Peter all his life as much as he has regretted taking him from a good adoptive home and handing him over to Cesar Faison (Anders Hove) to raise!

Peter’s early Catholic schooling full of do’s, don’ts, and morality lessons certainly didn’t take in him. Anna and Valentin have considered many times the concept of nature versus nurture, and Valentin has been on the side of nurture. Anna was too until she started seeing Peter manifesting more of the evil side of her twin sister Alexandra Devane Marick (Finola Hughes) and his father and his whole reason to lean to a good side dissolve with Maxie Jones’ (Kirsten Storms) rejection of him. Now both Valentin and Anna doubt if a “good side” even exists in Peter! Peter has threatened, cajoled, and manipulated all those who once felt close to him till they cannot stand it anymore, and something must be done!

General Hospital viewers will recall that Maxie and Britt Westbourne (Kelly Thiebaud) worked on a plan and had solidified it, to protect Maxie and her baby from Peter. Maxie had not quite figured out the next steps, but part of it involved keeping Peter placated so that his desperation wouldn’t make him more dangerous.

It seems that Maxie has been playing along with Peter, allowing him some access to her while trying to set boundaries but Peter doesn’t respect boundaries! Anna is horrified to hear that Maxie’s plan to keep Peter placated might have backfired on her when she finds out that Maxie is basically running a con job on Peter!

If Peter realizes Maxie is conning him he will become even more obsessive over her, and the control mechanisms will ramp up, possibly to Maxie being in danger! Anna knows that even their baby’s safety will not placate Peter enough to make him not dangerous.

Peter, as his father did over Anna so many years ago, has gone to the point of no return with his obsession and she fears that Maxie, as she once was by Peter’s father, maybe kidnapped by Peter! Peter would be so intent on keeping his possession of Maxie and controlling her, that he would think nothing of endangering her health or her pregnancy with the stress it would cause her!