Days Of Our Lives (DOOL) Spoilers: Theo Reveals He Still Has Feelings For Ciara To Chad 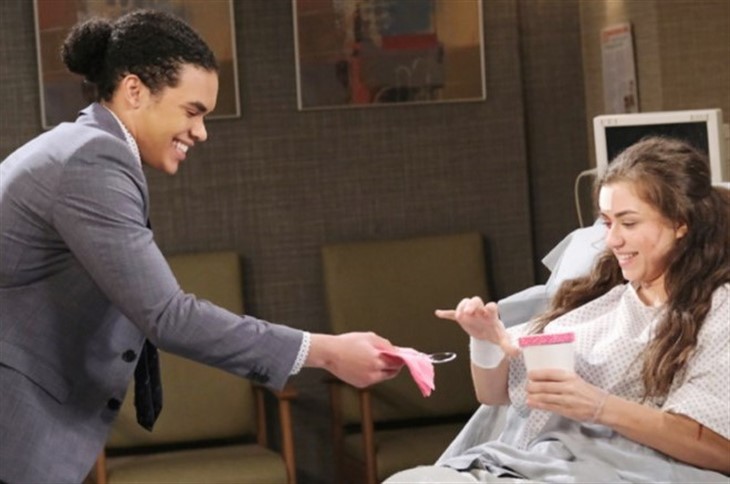 Days of Our Lives spoilers (DOOL) tease that Theo Carver (Cameron Johnson) will admit that he still has feelings for Ciara Weston (Victoria Konefal) to Chad DiMera (Billy Flynn) in an upcoming episode of Days of Our Lives!

Longtime Days of Our Lives viewers will remember that Theo was first Ciara’s best friend and then their friendship evolved into a boyfriend-girlfriend relationship. They were involved up until Theo started dating Claire Brady (Isabel Durant) and Ciara started dating Tripp Dalton (Lucas Adams). Ciara had also had a crush on Chad in the middle of all that when she was taking care of Thomas DiMera (Cary Christopher) during the time that his mother was presumed dead in a plane crash.

That was what broke up Theo and Ciara, and he had warned her Chad would break her heart. Later, he moved to South Africa. Ciara had been to South Africa to visit Theo once when she wasn’t sure how she felt about Ben Weston (Robert Scott Wilson). But as absence sometimes does make the heart grow fonder, now that Theo happened to be back in Salem when Ciara was found, and she doesn’t remember her life with Ben or her feelings, she and Theo have gotten close again and he’s realized he still has feelings for her. Figuring he can trust Chad as a confidant, he seeks him out and they have a good talk – the first time they have talked in years. Theo isn’t quite sure how to proceed with this, because Ciara is legally married to Ben, even though she hasn’t remembered much about him and is in fact rather antagonistic towards him!

Chad tells Theo what he knows about Ben Weston, and that he once was the security chief for his late brother Stefan DiMera (Brandon Barash). He wasn’t really there most of the time when Ciara and Ben were getting close because he, Abigail DiMera (Marci Miller), and their children were in Paris, France where he was running the Paris office of DiMera Enterprises. Chad tells Theo he’s sure he knows how stubborn and headstrong Ciara can be, and even if he had been there, he is sure he could not have talked her out of getting involved with Ben. Chad acknowledges that Theo is certainly in a tough spot because where Ciara is memory-wise is almost where she was shortly after they broke up.

Days Of Our Lives (DOOL) Spoilers: Gabi Tells Rafe She Knows Who Killed Charlie, Trying To Set Someone Up? #DOOL #Days #DaysOfOurLiveshttps://t.co/3qj5aCKibB

Theo says she doesn’t seem to remember their rough spots when he hurt her when he was dating Claire, and that he had been in a coma for a while. She doesn’t remember when she came down to South Africa and they worked out their differences either when she was confused about Ben. Chad asks how long he’s staying in Salem – Theo honestly hadn’t planned to stay very long but now Ciara is alive and in the hospital recovering and he doesn’t know what to do with that and his feelings for her. Chad tells him maybe he could stay in town a few months longer to see how things shake out with Ciara, and Theo will consider that.