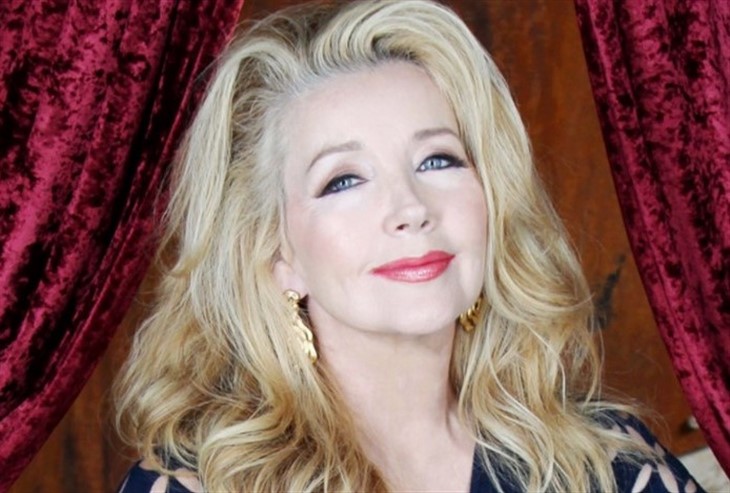 The Young and the Restless (Y&R) spoilers reveal that an alcoholism plot is on the front burner in the fictional town of Genoa City, Wisconsin. It involves the illustrious Newman family and has ensnared several of its members in a sad and history-repeating storyline.

Melody Thomas Scott plays Nikki Newman and she has been intimately involved in the ongoing bullying story that has swept up her granddaughter Faith Newman (Alyvia Alyn Lind; soon to be Reylynn Caster). Poor Faith has been drinking and right now is in the hospital after stealing vodka and a pickup and combining both in a joyride that ended in a horrific crash.

Nikki has battled alcoholism and wants desperately to help Faith. She recently spoke out about the story to TV Insider.

It was noted that there are similarities to a past tragic Newman family death and Scott replied, “Nikki is devastated and feels terrible guilt for having left Faith alone for literally one minute. Nikki is upset that this happened under her watch.”

“This situation brings Cassie’s tragic demise to the forefront of everyone’s minds; they know how badly this situation could end and they are desperate to find a way to control it.”

She went on to say that, “Nikki has been on high alert since she learned that Faith had been acting out with her “bad-influence” friend, Jordan (Madison Thompson). They had been caught drinking a few times and Nikki had many heart-to-hearts with Faith about the alcohol use. Faith feels more comfortable talking to Nikki about these things because of her grandmother’s alcoholism.”

It turns out that Jordan was the person behind the bullying and sent Faith a nasty text right before her rash and brash actions.

The Young And The Restless Spoilers Tuesday, April 6: Chelsea Celebrates As Jack Jumps Into Actionhttps://t.co/qUtFlKLjuF

Scott elaborated on the drinking plot by noting, “Certainly, Nikki is an expert on this subject. She can speak with more authority on the dangers of drinking than any other adult in Faith’s life. Also, the fact that Nikki is one generation above her parents makes her advice to Faith a bit gentler.”

She concluded, “There is a different dynamic between them. Faith feels this difference and will consider her grandmother’s words over the “preaching” of her parents.”