Days Of Our Lives (DOOL) Spoilers: Jack Warns Abigail Not To Make Him Choose Between Her And Gwen? 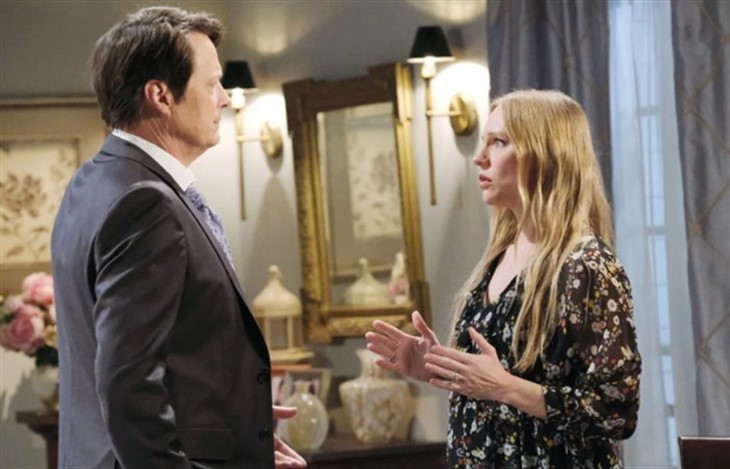 Days of Our Lives (DOOL) spoilers tease that Gwen Rizczeck (Emily O’Brien) is on an apology tour at the moment. She talked with both Jack Devereaux (Matthew Ashford) and Chad DiMera (Billy Flynn) and both accepted Gwen’s apology but she will have a much more difficult time if she thinks that Abigail DiMera (Marci Miller) will just and forgive and forget the past year. And even if she could forget that Gwen poisoned her with the intent to drive her crazy she still believes that Gwen murdered her grandmother, Dr. Laura Horton (Jamie Lynn Bauer).

Days of Our Lives Spoilers – Dr. Laura Horton Was The One Person Abigail DiMera Could Turn To When Her Mental Issues Became unbearable!

Laura was instrumental in helping Abigail regain her sanity not once but twice so it makes perfect sense that Abigail is feeling alone. If something happens again, Laura won’t be there to help and that likely scares Abigail. And since Gwen had threatened to kill the person who kept Jack from learning about her, and right after she discovered that person was Laura, Laura turned up dead in Gwen’s hotel room.

While Jack is willing to give Gwen the benefit of the doubt, and Chad just wants to put his tryst with Gwen in the past, Abigail is much less forgiving. And now that Gwen told Jack that Abigail and Gabi Hernandez (Camilla Banus) held her prisoner with the intent to get a confession out of Gwen.

While Jack has forgiven Gwen for almost ruining his marriage to Jennifer Horton (last played by Cady McClain) he still pretty much demanded that Abigail do the same. It’s obvious that Jack feels guilty about Gwen’s terrible childhood, he wants Abigail to at least call a truce. If Abigail can’t forgive her now, if Gwen ends up pregnant with Chad’s baby then the war won’t end anytime soon and Jack will likely tell Abigail not to make him choose. It seems as though there will be no truce anytime soon.

Days Of Our Lives Spoilers – What Will Happen?

Will Abigail eventually be able to let the things Gwen do be in the past or will her vendetta escalate if Gwen ends up pregnant with her husband’s baby? Will the two of them ever be the sisters that Jack wants them to be. And if Jack has to choose between the two, will his guilt over Gwen’s childhood lead him to side with Gwen? People do the most awful things to each other in Salem so stay tuned to Days of Our Lives airing on weekdays on NBC. And don’t forget to check back right here regularly for all your Days of Our Lives news, information, and spoilers!