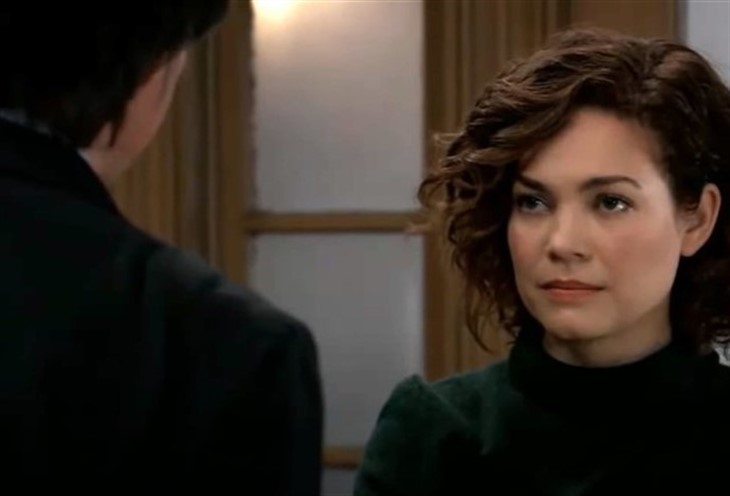 General Hospital (GH) spoilers and rumors that Elizabeth Webber (Rebecca Herbst) is still reeling over the murder of her husband Franco Baldwin (Roger Howarth). She was sort of preparing for his death because he had an inoperable brain tumor but he was shot and killed by Peter August (Wes Ramsey) way before the tumor could have taken him away from her and their family.

His murder was senseless and she also has to put on a brave face for the sake of her three boys who are missing their stepfather just as badly. Meanwhile, Hamilton Finn (Michael Easton) has moved out of Anna Devane’s (Finola Hughes) following their wedding that didn’t happen.

General Hospital Spoilers – Dr. Hamilton Finn Is A Single Dad For The First Time Since Violet Barnes Came Into His Life.

Finn is having a difficult time adjusting to being single now that Violet Barnes (Jophielle Love) is in his life. As viewers may remember, a couple of years ago Elizabeth’s sister Hayden Barnes (Rebecca Budig) revealed that she had given birth to Finn’s daughter. But then she had to leave town and may have become a victim of foul play. Regardless, she still hasn‘t returned

and she would never leave her daughter for so long if there was any way of getting back to her. But now that Finn is single he’s been bonding a bit with Elizabeth. She happy to be able to help Finn with Violet and he has been a great sounding board as she deals with her grief.

GH Spoilers – Dr. Hamilton Finn And Elizabeth Webber Might Find Each Other In A Rebound Relationship.

With both Liz and Finn having such a difficult time right now, it would be easy to see romantic feelings creeping upon them. But a relationship between the two would be a long way off and it would be quite complicated. Finn was in love with Elizabeth’s sister and they both miss Hayden very much. If they got together and then Hayden did return, she might see that as a betrayal by both her sister and the man she loved. But for now, the two are providing great comfort to one another and that is exactly what they both need at the moment.

Are Finn and Elizabeth spending too much time together? Could romantic feelings creep upon them as they support each other? Would it be real love or just rebound feelings? And how would Hayden react if her sister was sleeping with the father of her daughter? Is this trouble just waiting to happen? Sometimes love creeps up on the residents of Port Charles, so stay tuned to General Hospital airing weekdays on ABC. And don’t forget to check back right here regularly for all your General Hospital news, information, and spoilers!