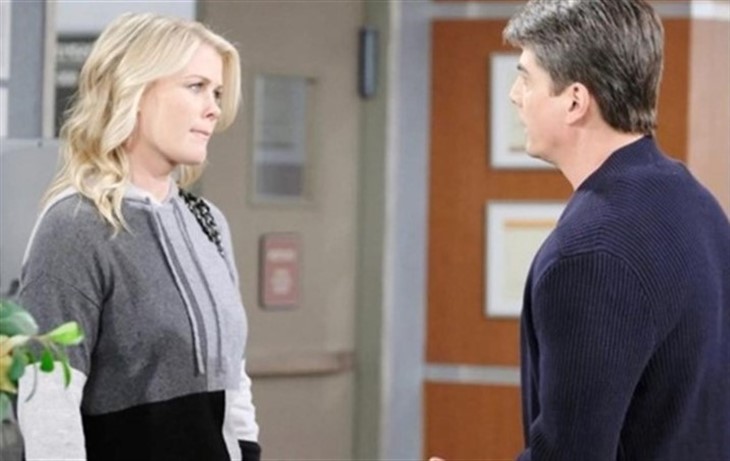 Days of Our Lives (DOOL) spoilers reveal that Lucas Horton (Bryan Dattilo) and Sami Brady (Alison Sweeney) have a night of passion. However, Sami ends up immediately regretting cheating on EJ DiMera (formerly James Scott). On the opposite side of the spectrum, Lucas wonders if they could reignite their relationship.

DOOL spoilers reveal that Lucas pays a visit to Sami, who locked herself in a room at John Black (Drake Hogestyn) and Marlena Evans’ (Deidre Hall) home. She was trying to avoid Susan Banks, who is really Kristen DiMera (Stacy Haiduk). As the two meet up once again, Sami admits that her marriage isn’t going very well. Despite EJ recovering, he has a problem connecting to Sami. The two end up going to bed together. However, they will both have very different expectations afterward.

Days Of Our Lives (DOOL) Spoilers: Theo Reveals He Still Has Feelings For Ciara To Chad

In the new issue of Soap Opera Digest, it is confirmed that afterward, Lucas wonders if they could get together again. Keep in mind, Lucas has been alone for a long time. There are also some fans that feel Sami’s soulmate isn’t EJ, but Lucas. Dattilo explains to the magazine what is going through Lucas’s mind.

“At first, Lucas is like, ‘Well, it happened and maybe it happened for a reason. Maybe there is something to us again.’” However, Sami sets him straight.

Days of Our Lives spoilers reveal that Sami doesn’t feel the same way as Lucas. She is married to EJ and despite their difficulties, is in love with him. She doesn’t want to lose him and is determined nobody finds out what they did. So, Sami tries to sneak Lucas out of John and Marlena’s house without being noticed. That plan doesn’t go over very well, though. They are discovered by the worst person possible.

DOOL Spoilers – It Gets More Complicated

Kristen knows what Lucas and Sami did in the bedroom. She uses it to blackmail her. However, Sami also has leverage as she is looking at Kristen, not Susan. So, the two end up blackmailing each other. It’s a matter of who is more desperate to keep their secret. This situation will continue to get more complicated as time goes on.

In addition, Kristen doesn’t just want Lucas and Sami to keep quiet, she has a job for them to do. She demands that they break up Jake Lambert (Brandon Barash) and Kate Roberts DiMera (Lauren Koslow). That way Vivian Alamain (Linda Dano) will continue keeping an eye on the real Susan in prison.