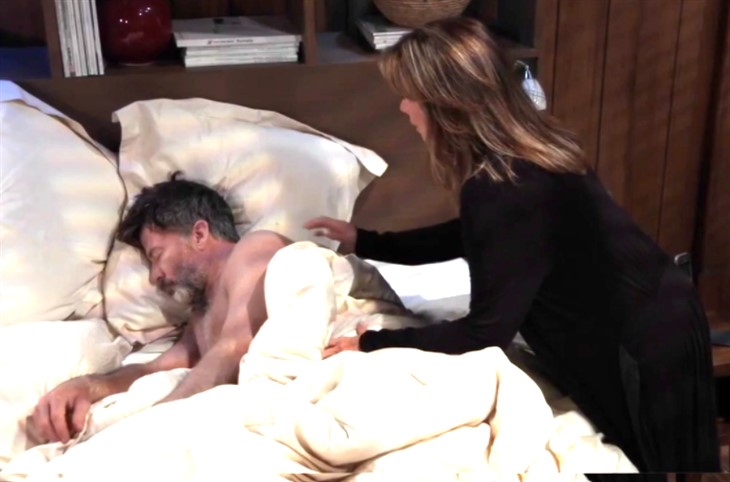 General Hospital (GH) spoilers tease that a story point that appeared to have been forgotten was actually resolved yesterday when we, along with Alexis Davis (Nancy Lee Grahn) discovered why the watch her mother left to her would stop working even after being fixed. During a painful flashback, Alexis was able to remember her father severely beating her mother on Christmas Day and broke the watch in the process.

Although she didn’t remember the horrific scene until yesterday, it explains why Alexis fights so hard for people who can’t help themselves, much like her mother. In a poignant scene after Alexis left for Pentonville, the watch begins ticking again which means that Alexis should also be free to move forward.

General Hospital Spoilers – Alexis Davis Is Still At The Center Of An Unsolved Mystery. Was Dr. Neil Byrne Murdered?

But there is still one more plot point that needs to be resolved in regards to Alexis. What really happened to Dr. Neil Byrne (Joe Flannigan)? As viewers know, Alexis and Neil were finally together and had just made love when Alexis went to the kitchen for coffee. When she returned to her bedroom, Neil had died in just that short amount of time! Later, it was revealed that Neil died from a drug overdose which came as a shock to everyone Alexis returned home and Julian Jerome helped her search her bedroom.

Julian found a syringe that Neil had apparently used on himself. But Alexis didn’t believe Neil was a drug addict and that someone must have snuck in and killed him? For a moment it seemed as though Ava Jerome (Maura West) had something to tell Alexis about Julian Jerome (William DeVry). Perhaps Julian had admitted to wanting the keep Neil from hurting Alexis again, so he drugged Neil and was able to get in and out of Alexis’ house without her noticing because he used to live there. But Ava didn’t say a word, so it seems unlikely that Julian murdered Neil.

At this point, the consensus seems to be that Neil had a drug problem that he had been able to successfully hide from everyone. And perhaps in his excitement at being back with Alexis, he didn’t realize that he gave himself too much. But Alexis had just seen Neil naked and she would have mentioned if there were any track marks, so the overdose theory doesn’t seem right either. But there is someone else out there, possibly still wondering around Port Charles, aimless now that Dawn of Day had been disbanded. And Neil was a big reason that everything started to fall apart for the cult.

General Hospital Spoilers – Could Daisy Kwan Have Killed Dr. Neil Byrne Because He Was Able To Deprogram Kristina Davis-Corinthos

Viewers may remember that Kristina Davis-Corinthos (Lexi Ainsworth) was recruited into Dawn of Day by Daisy Kwan (Kelsey Wang). Daisy was extremely happy as a member of Dawn of Day and her leader Shiloh Archer (Coby Ryan McLaughlin) meant everything to her. But after Kristina left them, things fell apart quickly and Shiloh was arrested. Daisy used as much of her parent’s money as she could to pay Shiloh’s defense until they cut her off. Shiloh eventually escaped prison but was killed by Sam McCall (Kelly Monaco).

After everything settled down, Daisy was alone but still a believer. And everything started to go wrong when Neil was successful in getting Kristina away from the cult. She likely would want to make him pay so somehow she managed to sneak into Alexis’ house and when Alexis stepped away, and Neil dozed off, she managed to inject him with enough drugs to kill him before he realized what she had done. This is all just speculation but it’s the only explanation that makes any sense.

GH Spoilers -What Do You Think?

Do you think Neil committed suicide or was an addict who hid his addiction from everyone? Or did someone kill him? Would Julian Jerome or Daisy Kwan be viable suspects or is there no answer that makes sense? Sometimes things aren’t all tied up in a pretty bow in Port Charles, so stay tuned to General Hospital airs weekdays on ABC.

And don’t forget to check back right here regularly for all your General Hospital news, information, and spoilers!