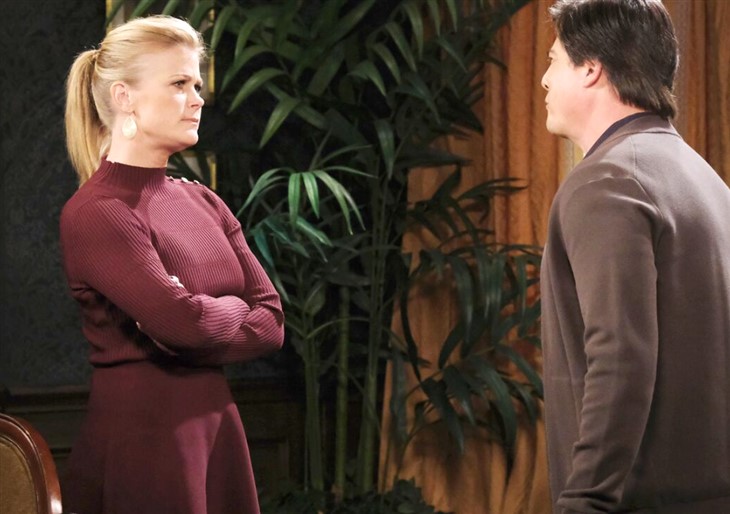 Days of Our Lives (DOOL) spoilers reveal that Kristen DiMera (Stacy Haiduk) knows what “Lumi” did. Sami Brady (Alison Sweeney) is determined to keep her cheating a secret. However, Lucas Horton (Bryan Dattilo) tries to convince Sami that they deserve another chance. Could Lucas expose the secret? It’s not his usual style, but he could get tired of always losing in love.

DOOL spoilers reveal that Lucas and Sami hung out in her room just like old times. They sat, chatted, and went through an entire bag of potato chips. Sami admitted that she didn’t want to see or talk to anyone in Salem. She explained that it had to do with her marriage to EJ DiMera (formerly James Scott). She admitted that she doesn’t feel like there is even a relationship to go back to. As Sami opens up to Lucas, the two get closer in other ways and end up sleeping together.

Even though Sami regrets betraying EJ, Lucas doesn’t feel the same way. He wonders if they could have another chance at love. He tries to talk to Sami about it, but she switches gears and insists she loves EJ. That is when Lucas calls her out and says she already cheated on him and admitted she didn’t know if there was a marriage to go back to. While these two will be on completely different pages, nothing could prepare them for what’s next.

Days of Our Lives spoilers reveal that Sami tries to sneak Lucas out afterward. However, Sami comes face to face with Susan, who she soon realizes is Kristen. When that cat out of the bag, Kristen threatens to tell EJ about Sami’s cheating. So, the two women end up blackmailing each other. When Sami fills in Lucas about Kristen and the blackmail, he goes along with the plan. However, Dattilo admitted to Soap Opera Digest that Lucas might secretly want EJ to find out. That way, “Lumi” could actually have another chance.

“Well, he doesn’t care until Sami says that Kristen is going to run to EJ. And once EJ is in the picture, Lucas starts to care because he actually secretly wants EJ to find out.”

Kristen not only blackmails Sami to keep quiet but forces her to break up Salem’s relationships. Vivian Alamain (Linda Dano) has ordered Kristen to split up Jake DiMera (Brandon Barash) and Kate Roberts DiMera (Lauren Koslow). Meanwhile, Kristen can work on tearing Chloe Lane (Nadia Bjorlin) away from Brady Black (Eric Martsolf). Not only does Lucas want another chance with Sami, but he doesn’t want to see Chloe hurt. So, he very well could intentionally expose the secret for more than one reason.