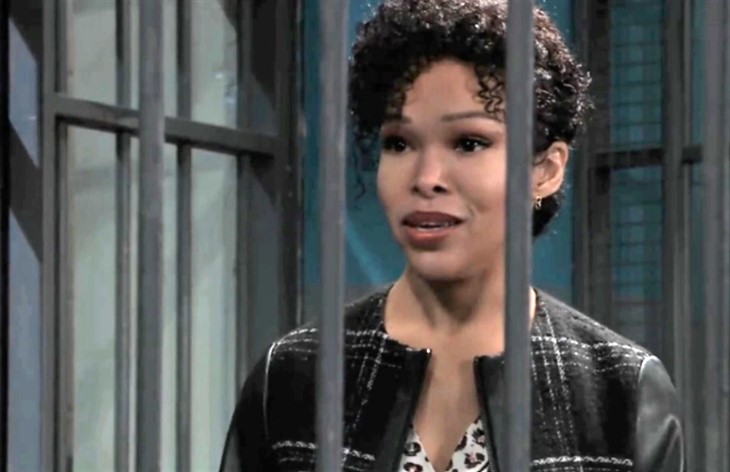 General Hospital viewers will recall that Portia Robinson, Marcus Taggert’s ex-wife, cheated on him with Curtis Ashford (Donnell Turner) many years ago around the time that Trina Robinson (Sydney Mikayla) was conceived. He has just been released from prison and he is at General Hospital, where his ex-wife is checking him medically post-release.

In a previous General Hospital episode, Curtis was blindsided and taken aback when he came to the loft that he and his still wife shared, to see that Port Charles Police Commissioner and former Drug Enforcement Administration agent Jordan Ashford (Briana Nicole Henry) was housing her ex-DEA partner Taggert.

Taggert tells Portia that he and Jordan had been going over Cyrus Renault’s (Jeff Kober) case file and that Curtis had shown up and he had looked surprised. Portia tells Taggert that makes sense, since he is living in what until recently was Curtis’ home, and with who until recently was his wife. Taggert responds that Curtis and Jordan are still married. Portia confirms and tells Taggert that he knows exactly what she means.

Taggert acknowledges, looking downward as he continues to sit on the examining table. Portia continues on, saying that seeing Taggert living there must have been extremely difficult for Curtis. Taggert then continues, confirming to Portia that Curtis had seemed like he was about to say something, but then backed off.

Portia and Taggert continue talking about the Ashfords’ disintegrating relationship and marriage in the examining room at General Hospital. Portia tells Taggert that Curtis obviously backed off with what he was going to say because Taggert was there. Portia then continues, telling Taggert not to forget that Jordan and Curtis had split up because Jordan had lied to Curtis about Taggert. Taggert says, so what – and asks Portia if that makes it his fault? Portia tells Taggert that although it doesn’t make it his fault, it does make it messy.

Taggert seems a little guilty as he tells Portia that he doesn’t want to do anything to get in the way of Jordan and Curtis patching things up, but it does make him wonder. Portia asks him to explain what it makes him wonder about? Taggert asks Portia if she would feel the same. Portia is clueless as to what her ex-husband is talking about, and tells him he has no idea what he is talking about.

Then Taggert shares a revelation – at least it’s a revelation to Portia! Taggert tells her that he knows that she cheated on him and that he is pretty sure that it was with Curtis! Portia, understandably, seems blindsided, not to mention embarrassed! This was a secret that she and Curtis had kept for many, many years, and Curtis was the one that broke off the affair when he found out she was married!