The Young And The Restless (Y&R) Spoilers: Kyle And Summer’s Future, Will Ashland Destroy Couple? 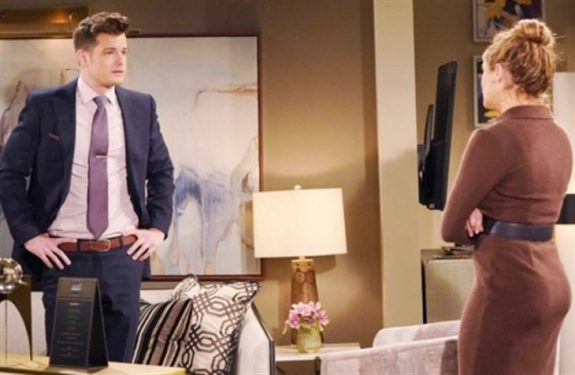 The Young and the Restless spoilers reveal that Kyle Abbott (Michael Mealor) and Summer Newman (Hunter King) make plans for their future. Even though they want to get married and start their new journey, Ashland Locke (Richard Burgi) could destroy all that. Mealor opened up about the couple’s relationship and if they stand a chance.

The Young And The Restless Spoilers – Progress And Roadblocks

Y&R spoilers reveal that Kyle and Summer will make plans for their future this week. However, it is also stated that the couple will hit an obstacle. So, it sounds like they will either encounter some sort of issue or disagreement. There is also the chance that Ashland will be responsible for the complications that Kyle and Summer face in planning their future together.

In the latest issue of Soap Opera Digest, Mealor explained that this is really Kyle’s first adult storyline. The actor said that in the past, Kyle also ended up in a place of selfishness. However, he can’t do that this time because there are other people involved, specifically a young child. So, he’s trying to look at this from a man’s perspective.

The Young And The Restless Spoilers – Summer Newman’s Growth

The Young and the Restless spoilers reveal that Mealor explained that this isn’t just a coming-of-age story for Kyle. It’s also one for Summer as they are going through this together. Kyle is pleasantly surprised at how Summer is handling the paternity bombshell. At the same time, despite Summer’s growth, Kyle is worried. He knows that Summer can sometimes be a loose cannon, so this is still a concern moving forward.

Y&R Spoilers – Getting It Right

It is confirmed that Ashland will target the people that Kyle cares about. This includes Summer Newman. However, it sounds like the couple might actually make it in the end. The actor teased that this time, they just might get it right.

“… it’s been a coming of age story for her as well because she gets to grapple with, ‘What does this mean for me and my future with the man I love?’ Kyle and Summer have committed to making their relationship work by taking the time they need because they want to get it right. This also seems like the first time that their communication is on a level that they may actually get it right.”

What do you think of the paternity storyline with Kyle Abbott and Ashland Locke? Do you believe that Kyle and Summer will end up making it this time? We will have to keep watching the CBS soap to find out how this story ends.