Days Of Our Lives (DOOL) Spoilers: Brady Admits He Still Loves Chloe, Will Kristen Try To Eliminate The Competition? 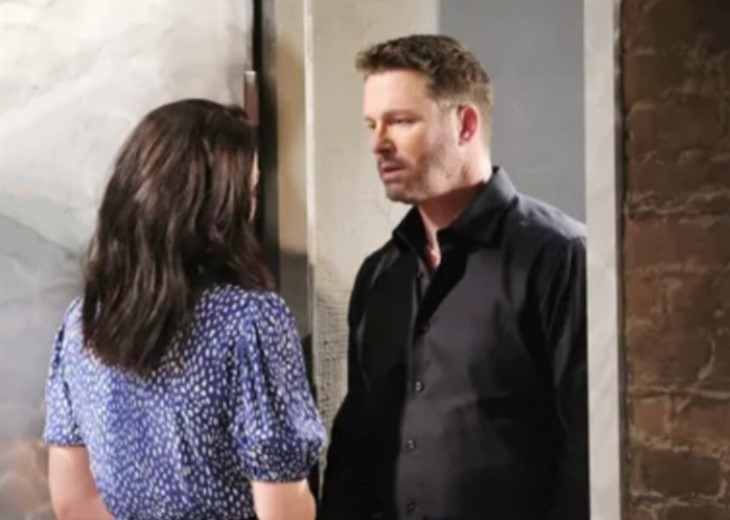 Days of Our Lives (DOOL) spoilers tease that Brady Black (Eric Martsolf) will admit he still loves Chloe Lane (Nadia Bjorlin) in an upcoming episode of Days of Our Lives; will Kristen DiMera (Stacy Haiduk) seek to eliminate the competition?

Days Of Our Lives Spoilers – Kristen DiMera’s Plan Has Backfired

Days of Our Lives viewers will recall that when Kristen asked Susan Banks (Stacy Haiduk) to switch places with her for a few months, it was in order for Kristen to make sure that she didn’t lose Brady to Chloe. However, she realized that in playing with Susan and encouraging Chloe to tell Brady her true feelings and then Susan as Kristen telling Brady to stay away from her when he visited her in prison, everything backfired! Brady even admitted that he didn’t feel that soulmate connection he once had with Kristen to Kristen as Susan, and because of what Susan as Kristen told him about staying away from him he figured she didn’t either!

However, the two do share a child – but that didn’t matter to him when he left Theresa Donovan (Jen Lilley) and their son Tate Black (Colin and Kyle Schroeder), on the other hand. He hasn’t seen his son in several years! He will have to single-parent his and Kristen’s daughter Rachel Black (Emma and Miller Kamienski) however until Kristen is released from prison – unless Chloe parents Rachel with him.

That will be one thing that Kristen absolutely will not be able to abide by – to lose both her man and her daughter to Chloe! The thought she might lose custody of her daughter if Brady and Chloe remarry will certainly set off a deadly rage in her and she will come to the conclusion that there is only one way to get rid of Chloe, and that’s permanent! Longtime Days of Our Lives viewers know how truly dangerous Kristen becomes when she is desperate!

Kristen usually commits crimes when she flies off the handle impulsively, but this time she plans and plots! She does have a plan a, which is taking advantage of a situation that arose. Kristen, dressed as Susan, saw Lucas Horton (Bryan Datillo) sneak out of Sami DiMera’s (Alison Sweeney) room at John Black (Drake Hogestyn) and Marlena Evans’ (Deidre Hall) condo! Remember, Susan is Sami’s mother-in-law and EJ DiMera’s (Dan Feuerriegel) mother! Kristen uses this to blackmail Sami by threatening to tell EJ, and Sami tells Lucas to seduce Chloe away from Brady!

Days Of Our Lives Spoilers: Will Ben Give Ciara A Brain Tumor? #Days #DOOL #DaysOfOurLiveshttps://t.co/5zgKQ3issM

However, if that doesn’t work, Kristen has to come up with a plan b. Kristen is already operating in desperation mode; Days of Our Lives viewers will remember what happened to poor Sarah Horton (Linsey Godfrey)! Kristen considers getting another steamer trunk and sending Chloe over to that Greek island to keep Sarah company, but the two of them may be dangerous together, they may figure a way off the island and back to Salem, if Sarah’s drugging has worn off! It was the same drug that Gwen Rizchech (Emily O’Brien) put in Abigail DiMera’s (Marci Miller) drink and she was in the mental hospital for months so maybe Sarah’s worse. It went into her bloodstream and bypassed the digestive system! Kristen may have to eliminate Chloe for good, and she sets her mind to coming up with a plan b to do so!