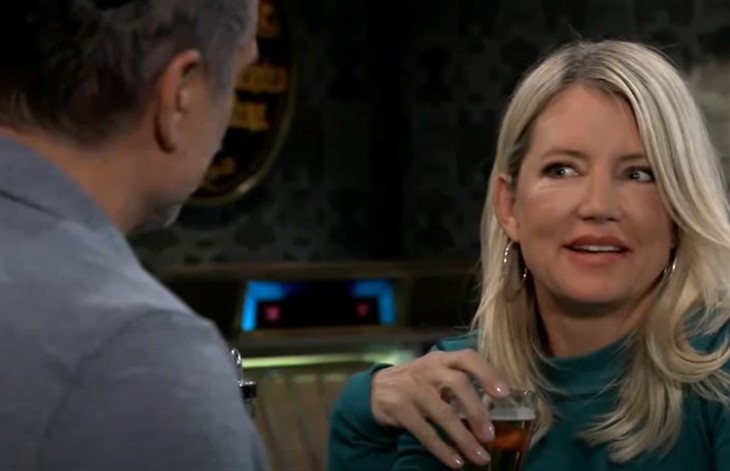 General Hospital (GH) spoilers tease that Nina Reeves (Cynthia Watros) will cross the line and sleep with a clueless Sonny Corinthos (Maurice Benard) in a future episode of General Hospital!

General Hospital viewers will remember that Nina has it in for Carly Corinthos (Laura Wright) – not only did she keep secret that she knew Nelle Benson (Chloe Lanier) had been her long lost daughter, she didn’t even try to save her life when she fell from a cliff! General Hospital viewers will remember that Nelle’s death didn’t exactly happen that way, but Carly had hesitated after the two of them had struggled in a clearing not far from the Corinthos vacation cabin, and perhaps Nelle would not have slipped and hanging by the time she got there.

She did stretch out her hands and try to pull her up, but Nelle was unable to hang on, and Carly was likely not strong enough to pull her up. But when Nina found out, she blamed Carly for Nelle’s death and broke up with Jasper “Jax” Jacks (Ingo Rademacher) because he also knew the secret about Nelle being her daughter and covered it up!

She is very angry with both of them, and no longer trusts Jax because he always puts Carly ahead of her! So when she got to Nixon Falls, Pennsylvania to visit with her old friend and former nurse Phyllis Caulfield (Joyce Guy) and her husband Lenny Caufield (Rif Hutton) and discovered “Mike”, who was really an amnesiac Sonny Corinthos, she started to call Carly only to be met with a barrage of accusations so she decided to keep what she knew a secret from her – the perfect revenge! But Nina really likes this new “Sonny” who is not like the mob boss Sonny he once was. He has forgotten that life and forgotten Carly, and they are becoming closer. General Hospital spoilers tease they will become closer still, and Nina will cross the line!

Sonny is becoming very protective of Nina – especially around that Elijah Crowe (Dan Martin) guy. His instincts tell him that Crowe is up to no good and when Nina seems to trust him, he ramps up his protectiveness. She may not be the same blonde woman he sees in his dreams and feels a connection with, but he starts to feel a connection with Nina, and her with him! They go to a dance together and the slow dancing really brings out some warm and fuzzy feelings in both of them, and surprisingly those warm and fuzzy feelings are spiked with passion!

General Hospital viewers will remember that Nina is rather easy to fall in love and in bed with men – she and Valentin Cassadine (James Patrick Stuart) fell into bed practically the same day they met, and she didn’t wait long with Jax either. Nina rationalizes that here she is with Sonny, not knowing who he is or who Carly or his family are, she’s into him, and he’s into her. They are miles away, and might as well be worlds away from Port Charles! When he becomes amorous, she easily falls into his arms without any guilt at all!