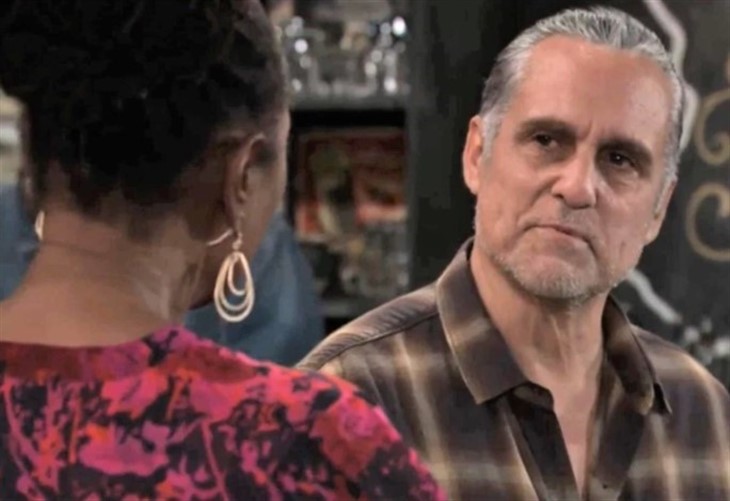 General Hospital spoilers tease that Phyllis Caulfield (Joyce Guy) will be taken by surprise as she spies “Mike” aka Sonny Corinthos (Maurice Benard) and Nina Reeves (Cynthia Watros) kissing in an upcoming episode of General Hospital!

General Hospital viewers will recall that Nina and “Mike” have been bonding and getting closer recently and have plans to go to a dance in Nixon Falls, Pennsylvania. As Sonny had been sweeping the floor of the Tan-O to Frank Sinatra music and dancing the broom around, Phyllis came in and was amused, and later Nina also came in.

Although Phyllis has seen the two becoming more and more friendly on General Hospital, she knows that Nina was very involved with a man back in Port Charles, New York, and recently very hurt by him.

As a matter of fact, Phyllis had met Jasper “Jax” Jacks (Ingo Rademacher) when she came to Port Charles to meet with him and Nina about the half-heart necklace and to give Nina information to track down her daughter with. As for “Mike”, he probably has a wife and family somewhere, he just doesn’t remember them although he seems to have a recurring dream of a tall blonde woman with whom he is dancing.

Of course, General Hospital viewers will know that is Carly Corinthos (Laura Wright). Nina knows that the man she is bonding with is Sonny, and she struggled with calling Carly to tell her he was alive and where he was. Nina had called Carly, but all she got was a barrage of anger and accusations, so Nina quickly decided that all is fair in love and war – and this is war, with Carly! With Sonny, however – it might be love!

GH Spoilers – From A Friendly Dance To A Passionate Kiss, And Phyllis Caulfield Is Taken Aback

General Hospital viewers will recall that Phyllis has talked to “Mike” about maybe finding out where he is from and who he is, and who might be waiting for him at home! He was wearing a wedding ring and a watch that was inscribed with “Mike” so she deduced he must be married and his name must be Mike.

General Hospital spoilers tease this is the watch left to Sonny by his father, Mike Corbin (Max Gail). When he was found in the snow, his suit coat was missing, and it likely had his wallet with his identification in it. The suit coat and the identification have never been found, and Sonny has been declared dead.

Nina even suggested to Sonny about trying to look for himself on the internet but he wasn’t really very interested – he likes his life the way it is even if he doesn’t know who he is or where he has been in the past! So, Nina has decided to let their friendship go where it will go, and not worry about it. She is really starting to like this version of Sonny Corinthos.

According to General Hospital spoilers, “Mike” is friendly, supportive, understanding has a great sense of humor, and he’s really got a cute pair of dimples!

They have been getting closer and closer and they found out there are some serious sparks between them when they slow danced in the Tan-O! As they as slow dancing, practicing for the upcoming dance, those sparks start flaming up and he pulls her in for a kiss!

GH spoilers reveal, Phyllis walks in and is taken aback, and clears her throat – after all, Nina shouldn’t get involved with someone so soon after Jax, and Mike might have a wife waiting somewhere!