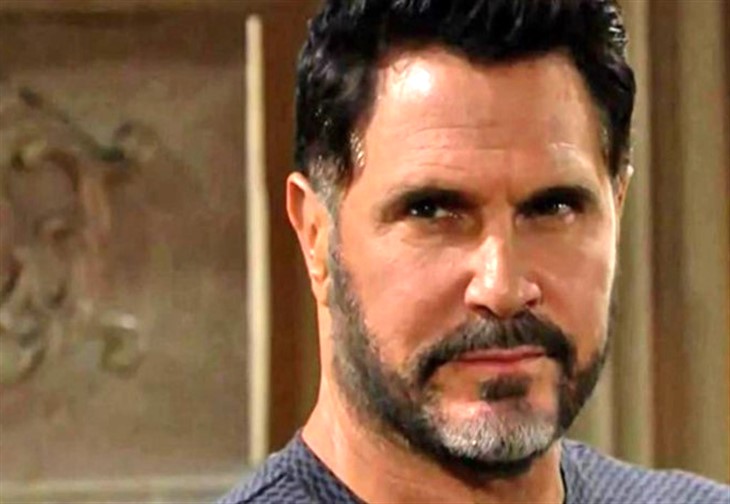 Viewers of The Bold and The Beautiful will remember how hard Dollar Bill tried to cover up Liam Spencer’s (Scott Clifton) accident in which Vinny Walker (Joe LoCicero) died. Liam wanted to do the right thing – but Bill wouldn’t let him. Liam knew that he ran into Vinny accidentally – it was a dark night, and Vinny was dressed in dark clothing. He just was suddenly in front of the car that Liam was driving, Bill with him after a visit with Hope Logan Spencer (Annika Noelle) and her mother, Brooke Logan Forrester (Katherine Kelly Lang) at the cabin that Hope and Liam had shared before Hope needed space.

Liam had missed a lunch date with her and had not texted her or called her until the last minute – Bill practically held his son hostage, and had disposed of Vinny’s cell phone and wallet and drove away with a passed out Liam in the car! Viewers of The Bold and The Beautiful will recall that he then proceeded to get rid of the car, selling it to someone in the Middle East who had wanted to buy it for quite a while and had agreed to repair the damage and repaint it. Whether Bill realized that transaction could be traced by law enforcement is a question. Bill didn’t think to wipe his fingerprints off the phone or wallet either, which he merely pitched off a bridge into the city below. Liam meanwhile is unnerved as Deputy Chief Bradley Baker comes to Forrester Creations asking way too many questions!

Bill and Liam have no idea that someone called the cops, and because of that call, Baker has a suspect in mind! After a despondent and shocked Thomas Forrester (Matthew Atkinson) and Hope return from the hospital morgue, where Dr. John “Finn” Finnegan (Tanner Novlan) had recognized Vinny and called Thomas, they return to work at Forrester Creations. Thomas was close to Vinny although on the outs with him at the time due to his interference with Steffy Forrester’s (Jacqueline Macinnes Wood) paternity test, which Thomas had not asked Vinny to do. This was the motive that Dollar Bill was afraid Liam would have for running over Vinny, which is why he tried so hard to cover it up.

The Bold And The Beautiful Spoilers: Bill Forced To Choose, Brooke Accused Of Murder? #BB #boldandbeautifulhttps://t.co/56vto2u7b1

The only problem is because Liam did not keep his lunch date with Hope, she is suspicious that Liam may have run over Vinny! Viewers of The Bold and The Beautiful will recall that she told Thomas she was afraid that Liam had killed Vinny! Liam was very upset over the paternity test has given him hope for more time with Steffy as a result of having another child with her, which of course also served to nearly break the marriage of Hope and Liam in two! Bill’s frustrations boil over when he learns that Baker thinks Liam is the prime suspect, and likely wonders if Liam told the truth, with the result of his being a suspect in a murder, just like he had feared!