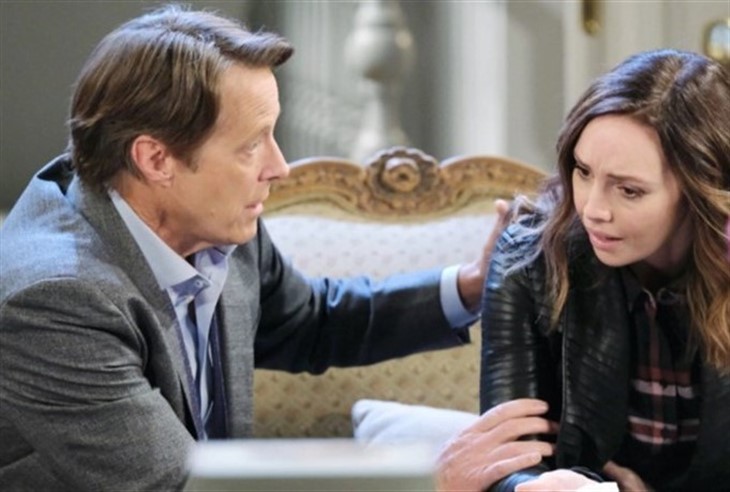 Days of Our Lives spoilers reveal that Jack Deveraux (Matthew Ashford) is a desperate man. Gwen Rizczech’s (Emily O’Brien) pregnancy has only enraged Abigail DiMera (Marci Miller) even more. Jack will pull Steve “Patch” Johnson (Stephen Nichols) into the family war. Will Steve be able to help or could it just make things even worse?

DOOL spoilers reveal that despite everything Gwen has done, she does seem truly remorseful. She realizes just how much her plan backfired. Even though Abigail was wrong for trying to melt Gwen’s brain, it’s exactly what Gwen tried to do to her. In all honesty, it seems that is really when Gwen started to turn around… after being held hostage and having the same thing nearly done to her.

Days Of Our Lives (DOOL) Spoilers: Brady Admits He Still Loves Chloe, Will Kristen Try To Eliminate The Competition?

Despite Gwen’s remorse, fans can certainly understand why Abigail doesn’t believe it. Abigail’s rage isn’t just about what happened to her, though. It really stems from her belief that Gwen murdered Laura Horton (Jaime Lyn Bauer). So, anyone that sides with Gwen or just wants a truce becomes Abigail’s enemy.

Days of Our Lives spoilers reveal that Jack is a desperate man. He literally cannot stand any more conflict. Jack isn’t old, but he is at the age where a heart attack is possible. So, Abigail should keep that in mind before lashing out at her father. He just wants peace, even if it’s not genuine. He just can’t keep being bounced back and forth between Abigail and Gwen. So, he decides to get some help.

Jack asks Steve for his help with the battling half-sisters. Now, Steve likely has heard about the situation. Abigail and Gwen’s war isn’t exactly a secret. Even Rafe Hernandez (Galen Gering) refused to listen to Gwen’s complaint about being kidnapped. Meanwhile, Rafe isn’t exactly interested in listening to Abigail’s complaints either. Can Steve help solve this dilemma before things go too far yet again? Or could him getting pulled into the war only make things worse? That remains to be seen as this conflict is explosive and unpredictable.

What do you think of the half-sister’s battle? Do you think that Gwen is truly remorseful? What are your thoughts on Abigail’s quest for vengeance? Will Steve be able to help solve this family feud or will the sisters only ceasefire when the unthinkable happens? Will Jack have to keep over from a heart attack before Gwen and Abigail put a sock in it? We will have to keep watching the NBC soap to find out how this story ends.