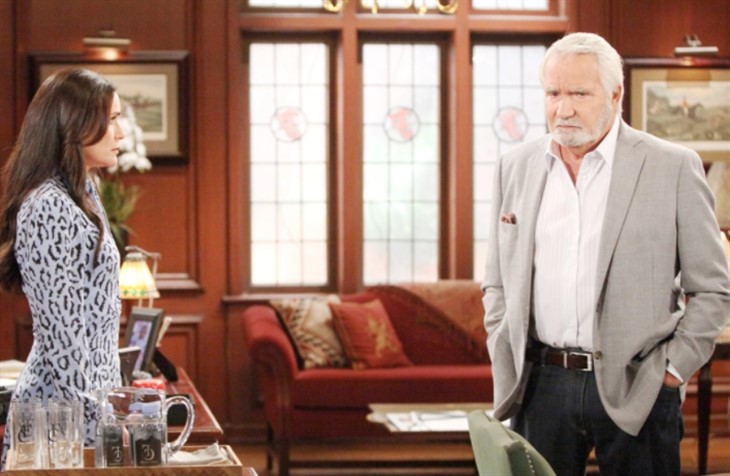 The Bold and the Beautiful (B&B) spoilers reveal that Quinn Forrester (Rena Sofer) is scheming once again. This is something that Eric Forrester (John McCook) is sick of. Innocent scheming is one thing, but hurting others or interfering in relationships crosses the line. Quinn and Zoe Buckingham (Kiara Barnes) could discuss their first joint scheme, but what if Eric overhears?

The Bold And The Beautiful Spoilers – Drugging Paris Buckingham

B&B spoilers reveal that Quinn suggested a cruel scheme to ruin Paris Buckingham’s (Diamond White) date. Even though it was just digestive enzymes, Quinn doesn’t know if Paris is allergic to anything or would have a serious reaction. Basically, Paris was drugged when you think about it. With Quinn’s prodding, Zoe did what was suggested. It definitely ruined Paris’ date but didn’t ruin her relationship with Zende Forrester (Delon de Metz).

Quinn was so pleased that Zoe took the bait. We really don’t believe that Quinn is genuinely interested in helping Zoe. She sees that Shauna Fulton (Denise Richards) is keeping her distance, so she has lost her scheming partner. She needs someone new to help do her dirty work and Zoe seems like the perfect person. Drugging Paris was most likely a test to see if Zoe would do as she was told. If Zoe can drug her own sister, then Quinn will have no problem having her target other people.

The Bold and the Beautiful spoilers reveal that Quinn is intelligent. She knows just how to do things to make people come to her side. Zoe felt “icky” about what she did to Paris. So, Quinn needed to do something for Zoe. If Carter Walton (Lawrence Saint-Victor) takes Zoe back, then Quinn can use that to coerce the model to do her bidding. She could claim that Zoe “owes” her.

Eric is already having issues with Quinn. He doesn’t feel that he can trust her. He also tells Ridge Forrester (Thorsten Kaye) that he no longer feels “comfortable” around Quinn. So, it won’t take much for him to kick Quinn to the curb once again. Since characters on soaps love to talk, talk, and talk some more, Eric is likely to overhear Quinn and Zoe chatting about Paris. When he learns what they have done, it could end the marriage forever.

What do you think Quinn’s true intentions are for Zoe? Is she just using the model to further her own agenda? Is Zoe going to be her new partner in crime and will Eric end up finding out the truth?