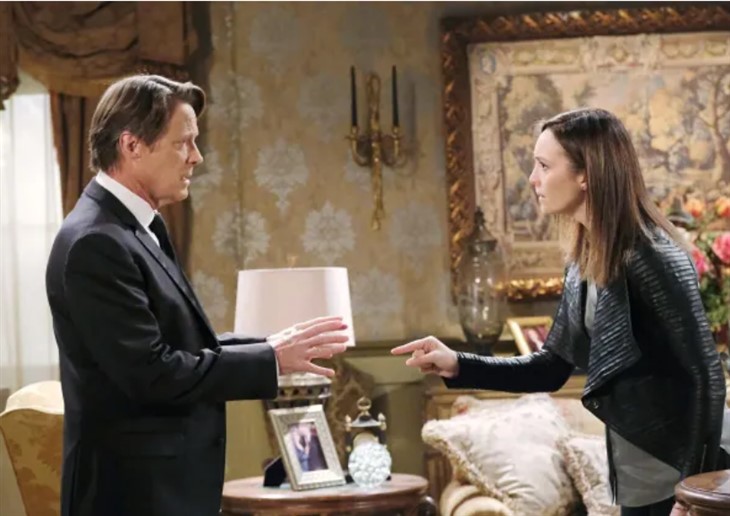 Days of Our Lives (DOOL) spoilers reveal that Gwen Rizczech (Emily O’Brien) is switching roles with Abigail DiMera (Marci Miller). The villain is now being portrayed as more of a victim while Abigail has turned into the ruthless attacker. Expect Gwen to continue going through a transformation. The actress confirmed that Jack Deveraux (Matthew Ashford) is changing Gwen for the better.

DOOL spoilers reveal that all of Gwen’s life, she has been bitter and resentful. She desperately wanted the family that she never had. So, when she came across Jack in the newspaper, she thought that was her chance. The only problem was that Gwen was lied to about her father abandoning her. She also misplaced the blame and targeted her own half-sister, Abigail DiMera (Marci Miller). By the time Gwen realized the truth, it was too late. She has already done incredible damage to Abigail, as well as the Deveraux and DiMera families.

Gwen wasn’t trying to get pregnant with Chad DiMera’s (Billy Flynn) baby. Even though Abigail suggested abortion, Gwen is going to keep the child. In fact, she thinks that this is a good opportunity for her to have her own family. She thinks that Jack can go back to Abigail and JJ Deveraux (Casey Moss). If it’s just Gwen and her baby, then so be it.

Days of Our Lives spoilers reveal that Gwen gives Jack a way out. However, he doesn’t take it. He is not going to choose between his two daughters and won’t abandon one because of what she did. Despite it being a complicated family matter, Jack promises to not abandon her. He says that he will be there for her no matter what she decides to do, even if she is having her brother-in-law’s baby.

Expect more positive changes for Gwen in the months ahead. Actress Emily O’Brien told Soap Opera Digest, “[Jack’s support] surprises her, and it’s a testament to where they are and how much he cares about her. It’s a chance for them to get closer, and it’s nice for her to have this father figure helping her when she’s not expecting it.”

Which Jack and Gwen might get closer, that doesn’t mean fans will buy it right away. Abigail has been a fan-favorite for many years. Gwen did so much damage to her half-sister. Despite Gwen’s changes, it will take a huge redemptive act to save this character from viewers’ hatred. What could Gwen do that will get you to see her as someone not evil, but troubled and capable of changing for the better?