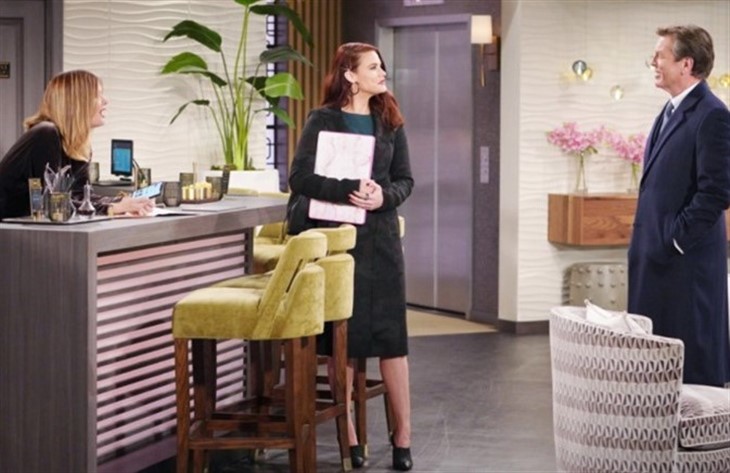 The Young and the Restless (Y&R) spoilers document that Sally Spectra (Courtney Hope) continues to believe that all isn’t lost. While she and Jack Abbott (Peter Bergman) haven’t fallen in love with each other, Hope’s crossover character wants to explore their potential.

Jack was flattered by Sally’s initial interest in him. They formed a friendship that turned into an early-stage romance. But then Jack became disillusioned by Sally’s immaturity.

Sally’s run on The Bold and the Beautiful was so well received that Y&R’s writing staff, as part of the connected companies, decided she was strong enough to relocate to Genoa City, Wisconsin. Her natural connection was Lauren Fenmore (Tracey Bregman), who was a famous crossover (to B&B and back) character herself.

The Young And The Restless (Y&R) Spoilers: Ashland’s Sudden Cardiac Emergency – Will The Tyrant Live or Die?

Wyatt Spencer (Darin Brooks) cared for Sally, but his true love is his current fiance, Flo Logan (Katrina Bowden). Wally had two stints, but Wyatt dropped Sally in both instances. The second split wasn’t accepted and led to the terminal illness ruse and Flo’s kidnapping. Somewhat similar motivations are winked at with Sally not giving up on Jack.

It wouldn’t be the same if Sally targets Phyllis Summers (Michelle Stafford) in response to Jally’s apparent ending. Stafford’s character is Jack’s two-time ex-wife and Phyllis is currently in love with Nick Newman (Joshua Morrow), who is another of her ex-husbands.

However, Sally did say that she would make Phyllis pay for interfering. Though that did come before Jack overheard the threat at the Grand Phoenix hotel.

Tangling with Phyllis may have already cost Sally more than she ever expected to lose. That happened because she severely underestimated her opponent. Whether Sally seeks revenge against Phyllis or not, the original Red has her number.

So, the current dynamic between Sally and Jack is broken. But that doesn’t prevent a new reality from forming.

The Young And The Restless (Y&R) Spoilers: Rey Wants To Use Connor To Take Adam Down https://t.co/htlDDhSoyF pic.twitter.com/bnoZllj4wI

Some type of exceptional event can allow Sally to earn Jack’s trust back and address his fears. If she’s able to engineer a positive outcome where Kyle Abbott’s (Michael Mealor) assumed the son is concerned, then that would qualify as a game-changer. Yet, even that development would include Jack becoming aware that Sally withheld knowledge of his grandson’s existence from him.

As was true on B&B, Sally creates opportunities and then wrecks her reputation. She needs someone like Jack to show her how to be a better person. Maybe, if all goes well and Jack offers compassion, this potential pairing will actually become a couple.