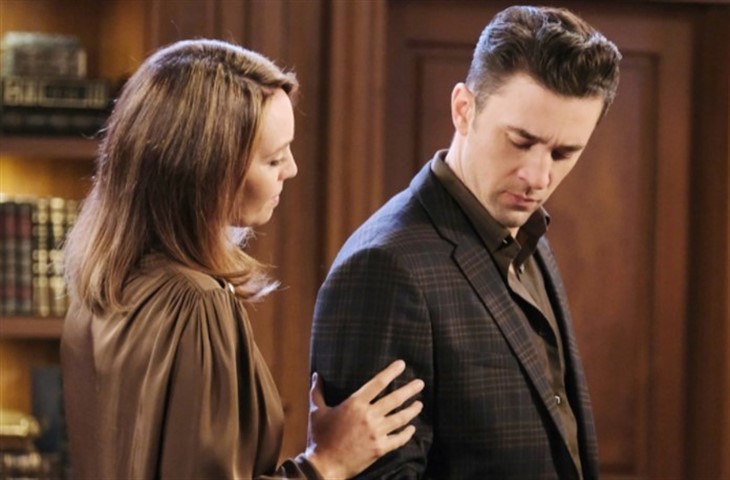 Days of Our Lives spoilers (DOOL) reveal that Abigail DiMera (Marci Miller) tells Chad DiMera (Billy Flynn) about Gwen Rizczech’s (Emily O’Brien) pregnancy. She also informs her husband about her abortion offer. When “Chabby” discusses getting Gwen to terminate the pregnancy, Chad is horrified. He refuses to play that game with anyone, including Gwen.

DOOL spoilers reveal that Gwen and Jack Deveraux (Matthew Ashford) were discussing her unplanned pregnancy. It was the worst time for Abigail to overhear their conversation but it happened. As predicted, Abigail was furious with Gwen and accused her of planning to get pregnant. Gwen explained that getting pregnant was the last thing she wanted. Her half-sister replied that if that’s true, then she needs to get the pregnancy terminated to prove it.

Abigail tells Chad that his one-night stand is getting a blood test to confirm the pregnancy. She tells him about pushing Gwen to get an abortion. Abigail then relays that she told Gwen that she has to get the pregnancy terminated because it’s best for everyone. In Flynn’s interview with Soap Opera Digest, the actor talked about Chad finding out that Abigail is trying to force Gwen to get an abortion.

Days of Our Lives spoilers reveal that what Abigail says next shocks Chad. At the same time, he understands that her mental illness is preventing her from making moral decisions. So, he steps in and makes the decision for both of them.

“… the revenge and the vengeance and the hate in her eyes, through all the stuff that she suffered, now to be dead set on wanting this abortion, he’s like, ‘Why?’ I think Chad’s really confused as to who is standing across from him.”

Chad refuses to coerce or manipulate Gwen into getting an abortion. Unfortunately, Abigail views this as him taking her side when that’s not what Chad is doing. He is viewing it from a moral standpoint. What if someone had tried pushing Abigail to abort their two children? However, Abigail’s mental instability does not allow her to see things this way.

“He’s coming from, ‘This is my mistake, I have to own it and I’m not going to manipulate her into taking some way out just to benefit me.’”

When Abigail views Chad as taking Gwen’s side and choosing her child over the “Chabby” kids, what will happen? Could Abigail’s mental illness get even worse and will it force Chad to put her back into the psychiatric hospital? We will have to keep watching the NBC soap to find out what happens with this storyline.