General Hospital (GH) Spoilers: Anna and Maxie Team Up To Set A Trap For Peter August 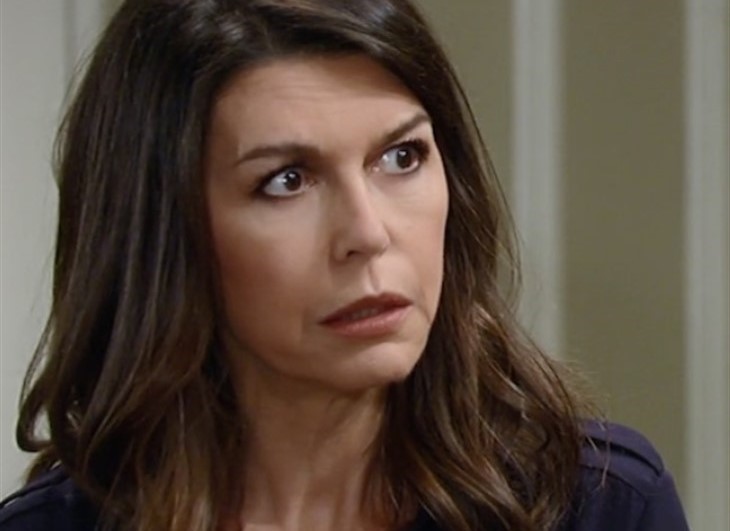 General Hospital viewers will recall that although Maxie and Anna had a falling out when their double wedding was stopped, Maxie has since realized that Anna is right about Peter. Peter had both women fooled for an extraordinarily long time, as well as his lifelong protector and mentor Valentin Cassadine (James Patrick Stuart)! It took a while for Anna and Valentin both to drop the blinders, and it has taken Maxie a while as well. Maxie is still not as close with Anna as she once was, which Anna strongly regrets, but now Anna needs Maxie’s help to set a trap for Peter.

He cannot continue to commit crimes unabated, and he must be brought to justice for not only the killing of Franco Baldwin (Roger Howarth) but for his past crimes, which are many. There were attempted murders of Dr. Andre Maddox (Anthony Montgomery), killing the assassin he hired himself to kill Maddox and Franco in the operating room at General Hospital, having Drew Cain’s (Billy Miller) plane sabotaged causing his death, and holding Jason Morgan (Steve Burton) captive for five years in the Boronsky Clinic in Russia. Now attempted murder by poison can be added to that list, with an unintended victim, Harrison Chase (Josh Swickard) with Hamilton Finn (Michael Easton) having been the intended target. Oh yes, and General Hospital viewers shouldn’t forget blackmail!

Anna wants Maxie to help her set a trap for Peter. All she has to do is call Peter and ask him to meet her in a particular place, where instead of Maxie, of course, she and Valentin will be waiting. They had to regroup to make a new plan since he had developed a toxin that supposedly had an antidote, which he never produced when she and Valentin let him go after tying him up in her basement.

They weren’t surprised that Peter didn’t hold up his end of the bargain, but now they have come to the conclusion that he was lying and there was never any antidote, to begin with! Peter has become much more dangerous and now he is doing all he can to not only follow in his father’s footsteps but competing with him after his death to be even eviler than he was!

Anna has seen this, and after years of fleeing Cesar Faison (Anders Hove), she can see the same patterns in Peter and so can Valentin! Anna explains that they plan to record Peter bragging about his illegal exploits, much as Franco did before he killed him but with one important difference; Robert Scorpio (Tristan Rogers)! As District Attorney, he allowed a warrant that allows them to gather the recording without Peter’s knowledge as evidence – aided by the fact that a Port Charles Police detective may die before Finn can identify the toxin and develop an antidote!

Maxie agrees to call Peter to meet her at the designated place, but she wants reassurance that this plan will really work, and won’t backfire when he finds she is not there! Anna tells her she needs to call Peter again to tell him she can’t make it. Maxie will figure out an excuse he’ll believe.