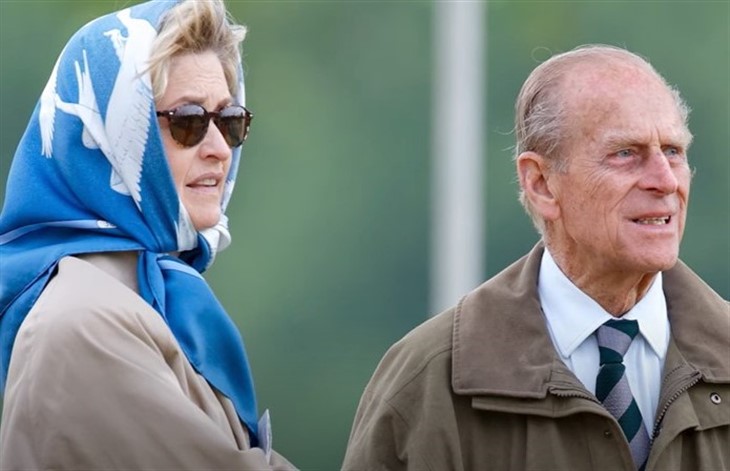 British royal family news reveals that Prince Philip, Duke of Edinburgh, the world’s longest-serving consort, was laid to rest today in the UK. The mourners were limited to a small number of 30 due to COVID restrictions and most, but not all, of those in attendance, were family members.

Penny Brabourne was one of the duke’s closest confidantes and she was seen arriving at Windsor Castle ahead of the afternoon ceremony. She and Philip would often partake in their carriage-driving hobby together.

Penny was a regular visitor to Wood Farm, the house at Sandringham Estate in Norfolk where the Prince spent much of his time after retiring in August 2017.

The pair had a 32 year age difference but were dedicated friends, a bond forged through their mutual love of equestrian carriage-driving.

The Queen faced tough decisions as she selected the 30 guests from the original 800 individuals once anticipated to attend.

For years Penny was invited to numerous royal engagements and today she was the picture of understated elegance in a coat dress, fern brooch, prominent necklace, and delicate earrings.

Her inclusion in the select group of 30 is a sign of how close she and Prince Philip were especially after his retirement from public life.

With her invitation, Penny joined the Queen as well as Philip’s four children and eight grandchildren and their respective spouses at the service in St. George’s Chapel.

Royal Family News – Prince Philip Has Been Laid To Rest

Others on the guest list included the Queen’s first cousins Princess Alexandra, the Duke of Gloucester, and the Duke of Kent. All had been faithful supporters of the monarch and Philip and were entrusted to carry out royal duties.

Others present included Jack Brooksbank and Edoardo Mapelli Mozzi, the husbands of Eugenie and Beatrice, daughters of the Duchess and the Duke of York.

But their mother was pointedly not invited, after having incurred Philip’s wrath when scandalous photos of her cheating on his son Andrew were published years ago.

Prince Harry’s wife Meghan was also missing said to be due to her being pregnant, as well as the Queen’s cousin, Prince Michael of Kent, and his controversial wife, Princess Michael of Kent.