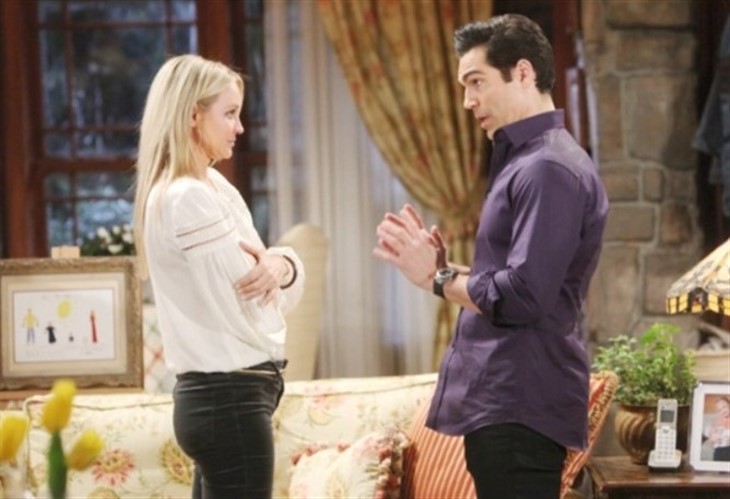 The Young and the Restless (Y&R) spoilers document that Sharon Rosales (Sharon Case) agreed to marry after a period of more than two years. Rey Rosales (Jordi Vilasuso) was smitten with Sharon from the moment he saw her, a common reaction that Case’s character has grown used to through the years.

Sharon has never had trouble attracting men. She’s smart and accomplished, both personally and professionally. Yes, at first blush she projects a natural appeal.

But as Rey got to know her he found that Sharon was still hung up on an old love or obsession or whatever category Adam Newman (Mark Grossman) can be placed into.

The Young And The Restless Spoilers – Adam Newman Through The Years

Sharon has been in love with three versions of Y&R’s current lead villain. The first, as played by Michael Muhney (Adam). It can be effectively argued that Adam was her pick because he wasn’t Nick Newman (Joshua Morrow).

Adam’s reckless nature was highly appealing. His bad-boy status matched Phyllis Summers’ (Michelle Stafford) bad girl persona. Hardcore Y&R fans know that the writing staff juiced up the drama when initially splitting Shick, pairing Nick with Phyllis in the mid-2000s. That was followed by Sharon and Adam’s coupling in the early 2010s.

The Justin Hartley (Adam) era saw Y&R write Adam toward softer territory in order to provide a fresh look. Sharon was rarely in a scene with Adam during that time.

Grossman’s casting was also part of a reverse SORAS (soap opera rapid aging syndrome), with Adam becoming a number of years younger. That became part of Shadam’s implied revival, with Victor Newman (Eric Braeden) calling on Sharon in 2019 to help jolt Spider’s memory in Las Vegas, Nevada, and Adam and Sharon’s later romantic reconnect at the penthouse in early 2020.

Yes, an entire section was written about Adam in a Shey post because that’s how Rey feels. Sharon is always putting that guy first by referencing Shadam’s history and Adam’s endless series of injustices and misunderstandings.

Rey was the safe, stable choice. Sharon saw his lawman status as a stabilizer. Vilasuso’s character also had a clean divorce and no children, which made his backstory far neater than Sharon and Adam’s. Again, another comparison where Rey is considered alongside the character Grossman now plays.

The Young And The Restless Spoilers – Sharon Rosales Underestimated Husband

Sharon knows that if Rey flies away she can continue circling Adam. The current Mrs. Rosales is also aware that Chadam is in trouble.

The Young And The Restless Spoilers: Rey’s Revenge, Vows To Make Adam Payhttps://t.co/B7TkhwlzTO

So, Sharon did appreciate Rey’s full support during her cancer battle. She also is grateful for his solid role as a stepfather to her children, any one of whom can be a handful, as Faith Newman (Reylynn Caster) recently demonstrated.

Rey has concluded that Sharon doesn’t put him above Adam, who she clearly seems to love more deeply. Whether Shadam revives or not, Sharon will be held responsible for causing Shey’s end if Rey follows through with the split and then seeks a divorce in the near future.