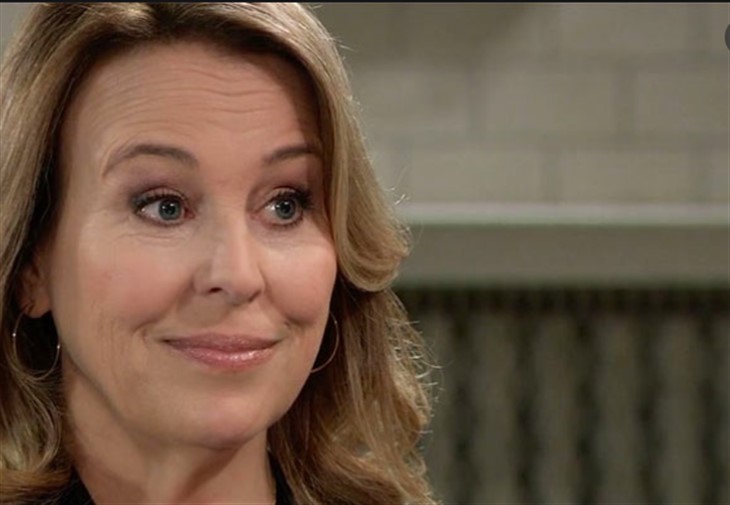 General Hospital (GH) spoilers reveal Mayor Laura Collins (Genie Francis) has been trying to take care of her loved ones. She has been concerned about the safety of the citizens of Port Charles. Laura has been dealing with Cyrus Renault (Jeff Kober). Recently Laura found out that she had two half brothers Cyrus and his brother Martin Grey (Michael E. Knight). Laura has not wanted to get to know Cyrus because he has a criminal organization. Cyrus has been engaged in many criminal activities since he came to Port Charles.

General Hospital (GH) Spoilers: Anna and Maxie Team Up To Set A Trap For Peter August

Laura is unsure if she can trust Martin because he helped Julian Jerome (William deVry) to escape from Port Charles after the bombing of the Floating Rib. Cyrus was the one who had Julian plant the bomb in the Floating Rib. The explosion put Laura’s daughter Lulu Spencer Falconeri (Emme Rylan) in a coma in a long-term care facility. Cyrus wants Laura to help him to find his mother Florence Grey (Annie Abbott) who was taken by Carly Corinthos (Laura Wright) and Jason Morgan (Steve Burton) as leverage to protect Sonny Corinthos’s (Maurice Benard) assets. Sonny had to be declared dead by Carly. Laura had been working with Sonny to keep the peace in Port Charles.

Laura is worried that her son Nikolas Cassadine (Marcus Coloma) is going to get into danger. He has made a deal with Cyrus in order to get protection for his aunt Alexis Davis (Nancy Lee Grahn). Alexis has been sent to Pentonville Penitentiary for attacking Dante Falconeri (Dominic Zamprogna). Alexis is in danger in Pentonville. Cyrus has told Nikolas that he will arrange for Alexis to be kept safe if he will find Florence for him. Nikolas wants to find Florence to keep Alexis safe. However, Nikolas is not sure what he will do about Florence. He and Martin are concerned about Cyrus getting Florence back. Laura does not want Nikolas to get involved with Cyrus. She does not want Cyrus to do anything to Nikolas if he cannot get his mother back.

Laura is close with Scott Baldwin (Kin Shriner). They have a long history together. Recently Scott lost his son Franco Baldwin (Roger Howarth). Franco had been fatally shot by Peter August (Wes Ramsey). Cyrus has taken advantage of the situation with Franco to frame Jason for killing Franco. Jason has been sent to Pentonville. Scott wants to help Jason because he does not believe that he killed Franco.

Laura will not want Scott to put himself into a dangerous situation if he goes after Cyrus and Peter. Laura is concerned about Elizabeth Webber Baldwin (Rebecca Herbst). She knows that Liz has been trying to pick up the pieces ever since she lost Franco. Laura wants to make sure that Liz and her sons are safe from Cyrus. Laura will try to support Liz as she finds a new life without Franco.

General Hospital Laura needs to make sure that the ones that she cares for are safe. Laura may need to try to get to know Cyrus better. Cyrus has expressed an interest in getting to know Laura as her brother. Can Laura give Cyrus a chance to be in her life? Could it help everyone for Laura to accept Cyrus as her brother? Can Laura keep Nikolas out of danger if he helps Cyrus? Can Laura offer the support that Scott and Liz need?

Tune into General Hospital to find out how Laura manages to take care of all the issues she is facing.