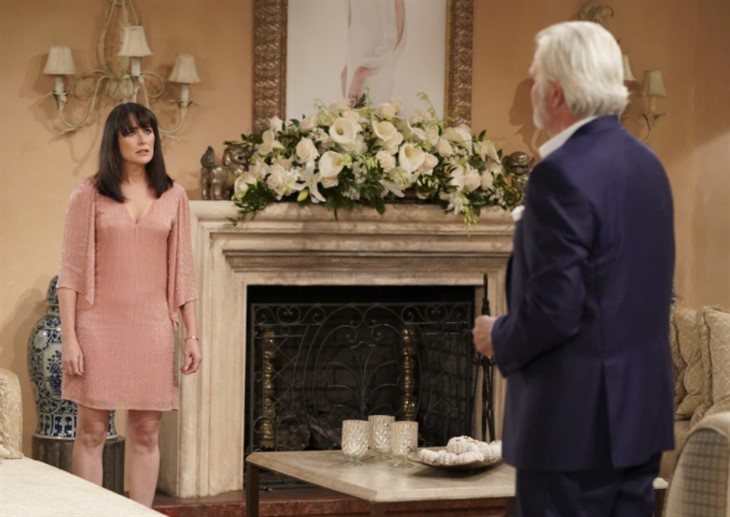 Quinn can tell Eric doesn’t act around her as he used to either – she thought after he forgave her (with a small f, as he told Ridge!) and allowed her to move back into what she felt was her rightful place as his wife, that everything would be all right again. But Eric has hardly touched her and acts like they are more of roommates with a tense détente than husband and wife. Quinn understands that there is a time with most couples when “the honeymoon is over” but Eric acts toward her more like the whole marriage is over and dead at the roots! For Eric’s part, it may well be. Perhaps Quinn doesn’t understand exactly how much on probation that she really is where Eric is concerned! But at least her portrait is still hanging where it ought to, and for Quinn, that is a huge thing!

Longtime viewers of The Bold and The Beautiful will recall that Quinn’s history of manipulations and lies has been a long one! They don’t just apply to Eric. She has a history of manipulation concerning many people, although mainly it has been for friends or family. However, usually, the results have hurt friends and family! Over the past couple of years have been the tactics that she employed to try and break up Ridge and Brooke Logan Forrester (Katherine Kelly Lang) and get her best friend Shauna Fulton (Denise Richards) married off to Ridge! That was pretty much the straw that broke the marriage camel’s back between Eric and Quinn!

Quinn decides to up the seduction and flirtatiousness she used on Eric to win him in the first place, and she suggests to Eric that maybe some time away by themselves might help their relationship. She suggests a romantic place, perhaps one that they have been to before and have good memories of. Quinn wants this “minimoon” – meaning mini honeymoon – to be a time of focusing on each other, and having a good time, and a romantic time, away from all the distracting influences of their businesses, families, and Los Angeles. Eric knows Quinn is trying – and trying hard, to get them back to where they once were, and he gives her credit for that. He’ll take it under consideration.