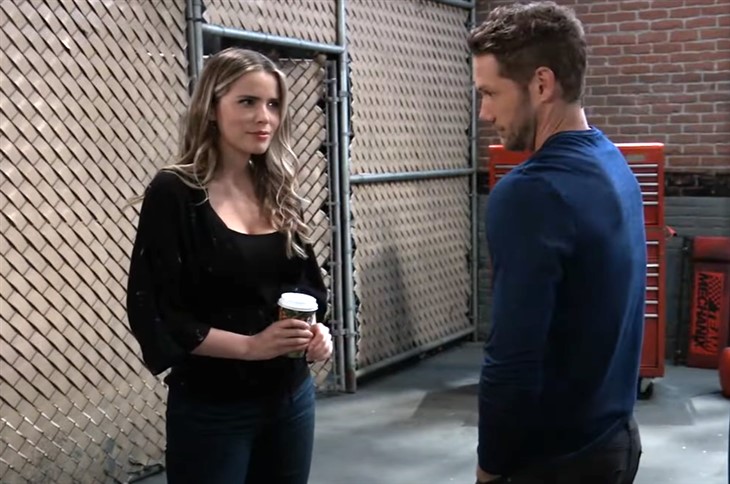 General Hospital (GH) spoilers (GH) tease that as soon as Sasha Gilmore (Sofia Mattsson) and Michael Corinthos (Chad Duell) faced the fact that whatever feeling they once had for each other had faded, she realized that there was someone else that she had already been drawn to. And while Michael kept a lot of things from her, Brando Corbin (Johnny Waycor) has been refreshingly open about his many secrets. He admitted that Dev Corbin (Ashton Arbab) wasn’t actually his son, and how Cyrus Renault (Jeff Kober) was holding that over his head.

For now, Brando has to continue working for Cyrus, or else Cyrus will make sure that the Corinthos family is arrested for creating the false paperwork that allowed Dev to remain in the United States although he wasn’t a citizen. But Cyrus doesn’t know that Brando was always a plant, and has been tipping off Carly Corinthos (Laura Wright) to Cyrus’ plans. But with Sonny Corinthos (Maurice Bernard) presumed dead and Jason Morgan (Steve Burton) in jail, Brando doesn’t have the backup or support he once did. So having Sasha to confide in maybe just the thing Brando needs. Of course, Sasha has her own grudge against Cyrus and may try to help a little too much.

GH Spoilers – Brando Corbin Will Have To Keep Sasha Gilmore From Getting Too Involved, In Order To Keep Her Safe!

But confiding in Sasha is one thing, but Brando has already been working overtime to keep Cyrus from harming Sasha. As viewers may recall, Sasha was spiraling out of control and turned to drugs to ease the pain of losing Michael. Cyrus was all too willing to provide Sasha with his new formula, and she overdosed and almost died in Cyrus’ home. Brando was able to get her to the hospital despite Cyrus’ wanting her dead. Brando managed to convince Cyrus that Sasha wasn’t a threat, and the two began getting closer. But Sasha is determined to bring Cyrus to justice, so Brando will be caught between his new feelings for Sasha and the need to keep her safe. If that wasn’t bad enough, Brando’s mother Gladys Corbin (Bonnie Burroughs) has already made it clear that she does not approve of Brando and Sasha becoming romantic. With all these obstacles already, do these two even stand a chance?

Will this newfound honesty continue to bring Brando and Sasha closer? Or will Sasha take it upon herself to meddle with Brando’s undercover work? Will Gladys’ big mouth cause the couple even further issues, or do these two have what it takes to make it long-term? Will Brando and Sasha continue to find passion in the garage or will they make it more public? Could Gladys and Cyrus bring danger if they continue down this path? Will they both survive?

Sometimes love gets messy in Port Charles, so stay tuned to General Hospital airs weekdays on ABC. And don’t forget to check back right here regularly for all your General Hospital news, information, and spoilers!