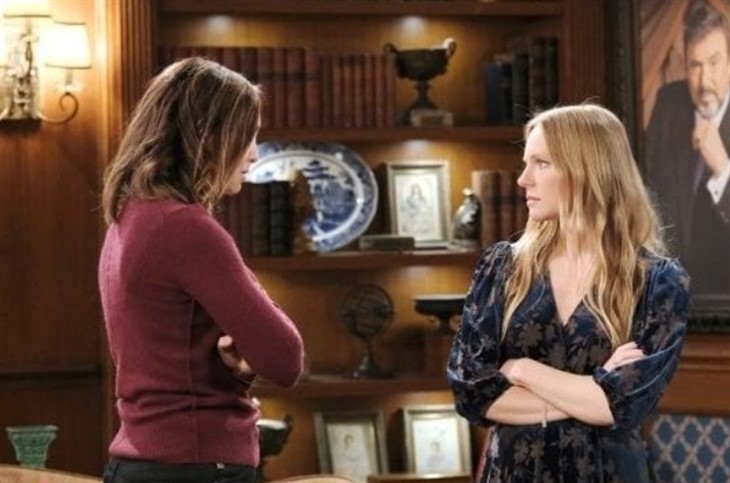 Days of Our Lives (DOOL) spoilers for the week of April 26 reveal that Abigail DiMera (Marci Miller) finally gets her way. At least, that is what she thinks when she drives Gwen Rizczech (Emily O’Brien) out of Salem. However, Jack Deveraux (Matthew Ashford) steps in to stop her. If Gwen ends up sticking around, could Abigail decide to leave Salem and her family behind?

DOOL spoilers reveal that when this storyline first started, it was about Gwen punishing Abigail for something that wasn’t even her fault. However, now it seems that the two have switched places. Gwen seems to be coming around and acting like a half-decent, yet troubled, young woman. Abigail on the other hand has turned into a bitter, vengeful woman.

It is teased that Abigail finally gets a victory. She told Chad DiMera (Billy Flynn) that she wasn’t going to stop until Gwen was gone. She still sees Gwen as a major threat and to a certain extent she is. She’s not as bad as when she first came to Salem but we definitely don’t trust her yet. It is confirmed that during the week of April 26, Gwen tells Jack that she’s leaving Salem.

Days of Our Lives spoilers reveal that Jack isn’t going to let Gwen leave. He knows that Gwen and Abigail are at war with one another. However, he feels that nothing is going to get solved by either of them leaving town. In his mind, they need to learn to peacefully coexist. When Abigail finds out what her father has done, she will go into a rage. She already thinks Chad is betraying her by not forcing Gwen to get an abortion. Imagine how she will feel when Jack convinces Gwen to stay in Salem.

It is clear that Abigail is becoming more unstable by the week. This just might send her over the edge. It could mark Miller’s temporary exit as the actress just had her baby. Could Abigail decide that since everyone is allegedly siding with Gwen, that she will be the one to leave Salem? Would she really leave Chad and her children behind?

Previously, it was speculated that Abigail would end up back in the psychiatric hospital. However, that might be too overused and too predictable. After all, each time Miller or her predecessor, Kate Mansi has left the soap, it’s either fake death or hospitalization. Perhaps the writers have come up with a new way to write Abigail out for the time being. Abigail’s mother, Jennifer Horton (Melissa Reeves/Cady McClain) is still in Boston, so that could be where Abigail goes. We will have to keep watching the NBC soap to find out how this story ends.