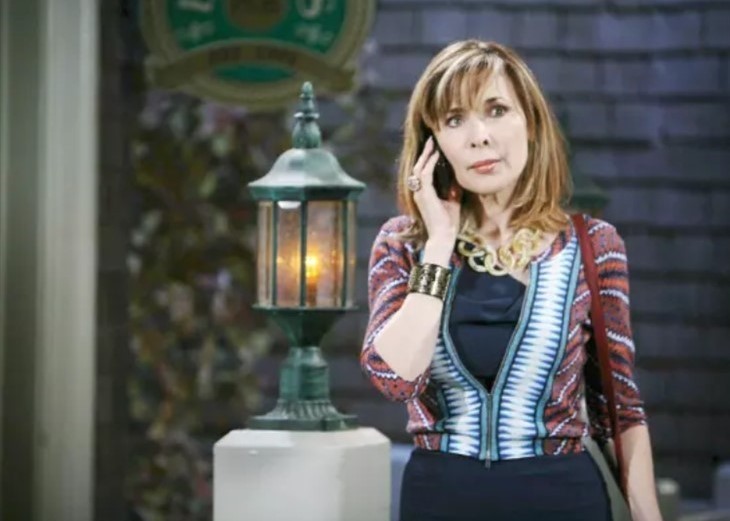 Days Of Our Lives Spoilers – Kristen DiMera Is Finding It More And More Difficult To Maintain Her Cover!

Days of Our Lives viewers will recall that Kristen has been finding it more and more difficult to maintain her cover in recent episodes of Days of Our Lives. The first person to discover her true identity was Sarah Horton, (Linsey Godfrey) who unfortunately paid dearly for her discovery – if she even survived at all. The last time Days of Our Lives viewers saw Sarah, she had been drugged and packed in a steamer trunk to be shipped to a Greek island, possibly owned by the Kiriakis family – or perhaps a re-created Melaswen?

DOOL spoilers and recaps show Kristen revealed herself to Sami DiMera (Alison Sweeney) but it was part of blackmail to keep her identity a secret, plus a deal to keep Brady Black (Eric Martsolf) away from Chloe Lane (Nadia Bjorlin).

Kristen as Susan caught Lucas Horton (Bryan Datillo ) sneaking out of Sami’s bedroom at her mother’s house and threatened to tell her husband, and Susan’s son, EJ DiMera (Dan Feuerriegel)!

But Kristen has another deal with another person – Vivian Alamain, (Linda Dano) who is in Statesville Prison with the real Susan who is impersonating Kristen! For keeping an eye on Susan and making sure she doesn’t blow her cover, Kristen has to get her son Jake DiMera (Brandon Barash) away from Kate on Days of Our Lives!

It looks like it is in the process of trying to get Kate away from Jake is when Kate fights back and blows Kristen’s cover! Sami, in the meantime, tries to keep up her own deal with the devil by convincing Lucas to draw Chloe’s attention away from Brady by seducing her! Days of Our Lives viewers will recall Lucas and Chloe were involved a few years ago. They were married for a few months in 2009, almost as long as he and Sami were married in 2007!

In the Days of Our Lives weekly spoiler preview, it looks like “Susan” and Kate are in the newly remodeled and redecorated DiMera mansion in front of a table where possibly both women have returned from shopping.

There are three shopping bags, one nearer “Susan” and clearly from the same store, and one other from a different store closer to Kate. “Susan” is looking down at something near the two shopping bags when Kate suddenly sneaks up behind her and obviously suspicious, pulls off her wig! “Susan” turns quickly as she feels the tugging, and wheels around bearing blonde hair, although she still has her glasses and false teeth in!

It is possible that all the shopping bags are Kate’s, and “Susan” was snooping into something that she should not have and Kate caught her! Kate looks angry as she grabs the back of “Susan’s” hair and winds up pulling it off! Kristen looks blindsided at Kate, and obviously, there will be some questions about why she’s pulling her hair!

But Kate doesn’t just have an angry look on her face – she looks like she’s caught someone doing something they shouldn’t, but the question is, did she catch Susan/Kristen snooping in something of hers, possibly her phone, or did she suspect “Susan” was Kristen in disguise all along?