The Bold and The Beautiful (B&B) Spoilers: Hope Puzzled By Liam’s Odd Behavior, Confides In Thomas 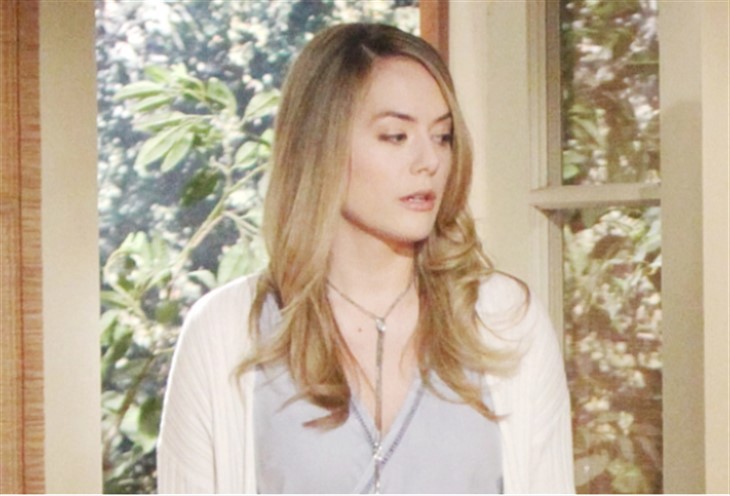 As viewers of The Bold and The Beautiful will remember, Vinny Walker’s (Joe LoCicero) death was an accident – pure and simple. Vinny was wearing dark clothing and walking across a dark road on a dark night, and Liam didn’t see him until it was too late to stop the car! He did try – the screeching of the brakes could be heard, but Vinny obviously didn’t see the car coming either! If Dollar Bill Spencer (Don Diamont) had acted like a normal, responsible person, all he would have had to do is verify to first responders after calling 911 that the pedestrian could not have been avoided.

They were driving along, minding their own business, and all of a sudden this pedestrian was right in front of them! Liam even told his father as much, but he was so upset over the whole scene he fainted! But Dollar Bill acted very much like a man who’d done prison time – he didn’t trust the police – he just knew that they would assume Liam ran Vinny down on purpose! He took steps to cover it up, selling his car to a man in the Middle East, after discarding the tires that were on the car so tire tracks couldn’t be traced, and took Vinny’s cell phone and wallet and threw them off a bridge, after crushing the phone. However, he didn’t think to wipe his fingerprints off of them!

Hope has noticed there is something wrong with Liam, but he will not talk about it. He avoids talking about certain subjects – such as Vinny, for instance. He seems nervous and like he has something to hide. She is very worried about his odd behavior – he frequently seems evasive when she tries to get more details from him about what is bothering him and just denies it and says he’s okay! Hope has seen Liam with very worried looks on his face that he basically has lied away her concerns, or at least he thinks he has!

The Bold And The Beautiful Spoilers: Thomas and Liam Divide Hope – Pulled Between Love and Truth #bb #boldandbeautifulhttps://t.co/Aqw3pRUbXy

Viewers of The Bold and The Beautiful know that it’s Liam’s guilt that is eating him alive – whether Vinny died at the scene is irrelevant. Bill just chose to drive away and wouldn’t allow Liam to call 911, and if he had, even if Vinny died anyway, he would at least know he tried to get him help and could live with himself! Hope has not gotten to the point of being suspicious but she is very worried.

She cannot seem to get through to him that he can trust her and tell her what is wrong! She talks to Thomas about it, telling him she doesn’t know if Liam is sick, maybe dying, and can’t bring himself to tell her, or what is going on! She does note to Thomas, however, that he seems to avoid conversation about Vinny and what happened to him. That takes Thomas back a bit because Vinny was his friend, not Liam’s!