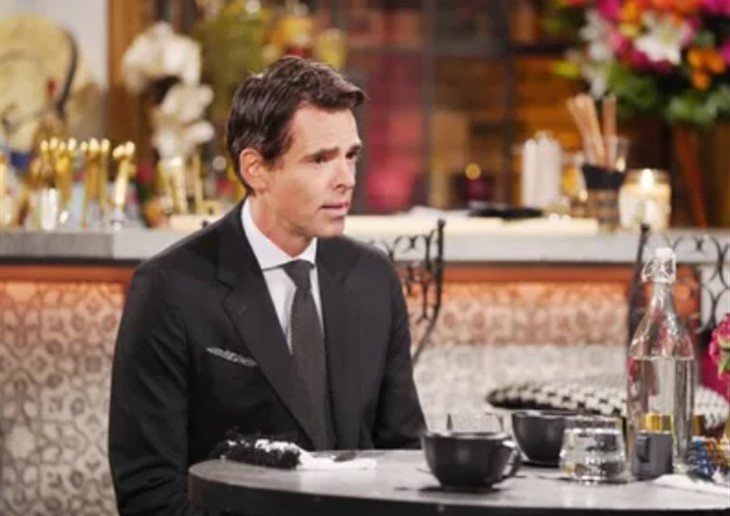 The Young and the Restless (Y&R) spoilers document that Billy Abbott (Jason Thompson) can’t stop himself from engaging with the father of his nemesis. Chiding Victor Newman (Eric Braeden) in the lobby of the Grand Phoenix hotel led nowhere. But Billy gets an adrenaline rush from those exchanges, which temporarily quenches his thirst for revenge until dry mouth returns.

Victor raised his glass to Billy-boy, which was a warning in disguise. The Moustache sees Thompson’s character as a fool. But he also recognizes Billy as an ongoing threat to Victoria Newman’s (Amelia Heinle) future stability.

The Young And The Restless Spoilers – Two Paths To Victory

Victor encouraged Victoria to made a bid for Cyaxares. He felt that she shouldn’t have sold off Newman Enterprises media division after being elevated to the Chief Executive Officer position.

Yes, she had put in the work across many years. But Victor agreed to accept her ultimatum pitch, which is how Victoria gained the promotion. Of course, Victor still owns the company and has a controlling interest in the Board of Directors.

So, Newman Enterprises’ steal of Cyaxares from the private offer Victor and Adam Newman (Mark Grossman) made still means that Braeden’s character wins. That was part of the message Billy received.

Victor can regain control at any moment, which Victoria knows. She seems to have convinced herself that won’t happen, which is a naive assumption.

Billy is similarly foolish. He was telling Victor that Victoria’s win means Chance Com won’t be targeted, as he knew the Moustache and his Mini-Me intended to do. But Victor could use a minion within Newman to exact a smear against Billy, with or without Cyaxares.

If Victor is somehow able to make another deal with Ashland Locke (Richard Burgi), then that tool will be used to take out Billy and Chance Com.

The Young And The Restless Spoilers – Billy Abbott Wins This One?

Ashland’s text to Victoria and his subsequent health crisis puts the second sale agreement into question. The Lockeness Monster is still trying to play all bidders against each other. So, it’s possible that Billy and Lily Winters (Christel Khalil) could still emerge victorious, though Khalil’s character has resisted this venture from the jump.

If Chance Com buys Cyaxares, then Billy would turn his growing media torch on Adam and Victor. However, Victor could still take this prize privately, or use Victoria’s win to create Billy’s next loss.