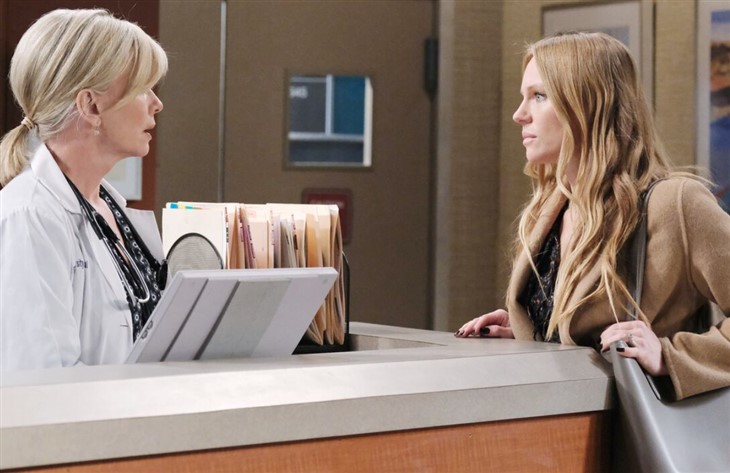 Days of Our Lives (DOOL) spoilers for May Sweeps reveal that Gwen Rizczech (Emily O’Brien) loses her baby. An investigation will probably be done, which could prove the miscarriage wasn’t natural. It is confirmed that there will be consequences. Kayla Johnson (Mary Beth Evans) could be forced to testify against her own niece. Will Abigail DiMera (Marci Miller) go to prison?

Days Of Our Lives Spoilers – Gwen Rizczech Rushed To Hospital

DOOL spoilers reveal that Gwen is not getting an abortion. She decides to keep her baby, which infuriates Abigail. She feels that something is wrong with her baby during May Sweeps. Suddenly, she is rushed to the emergency room. Head writer Ron Carlivati told Soap Opera Digest that there are “tragic consequences.” So, that sounds like Gwen loses the child she’s carrying.

The scribe said that he couldn’t give anything away. However, what happens to Gwen during her pregnancy will have “consequences for everyone involved.” So, that sounds like Abigail doesn’t act alone in her mission to get rid of Gwen’s baby.

We know that next week, she bursts in on Philip Kiriakis (Jay Kenneth Johnson) and Gabi Hernandez (Camila Banus) having some passion. Even though Gabi doesn’t want to go back to prison, Abigail just might convince her to help with one specific task. Gabi might not even actively participate in Abigail’s scheme. However, she could get Abigail something to help accomplish her goal, such as a drug that causes an abortion.

Days Of Our Lives Spoilers –

Kayla Johnson Bound By The Law

Days of Our Lives spoilers reveal that Kayla will be stuck in the middle. She feels for Abigail but also saw the emotions and regret when Gwen had her sonogram. Gwen didn’t even want to look at the screen. We also know that Abigail burst into the hospital and started demanding that Kayla break confidentiality and give her Gwen’s test results. Of course, this is illegal and Kayla won’t break the law. Not even for Abigail, who she loves dearly.

If Kayla runs tests or somehow finds out that Abigail might have caused Gwen’s miscarriage, she is bound by the law. She will have no choice but to tell Rafe Hernandez (Galen Gering) the facts. If Abigail is arrested, then Kayla will also be forced to testify in court. It’s not a matter of taking sides. Kayla could lose her medical license and her freedom if she covers for Abigail.

It is teased that Abigail will be making a temporary exit soon. There was speculation that she would end up back in the psychiatric hospital or could spend time with Jennifer Horton (Melissa Reeves/Cady McClain) in Boston. However, by “tragic consequences for everyone involved,” could Abigail actually go to prison for killing Gwen’s baby? What will the penalty be for Gabi since she probably helps her abstain from the drug? How does Chad DiMera (Billy Flynn) fit into this plot?