Days Of Our Lives Spoilers: Gabi’s Romantic Future Confirmed, Is It With Philip Or Jake? 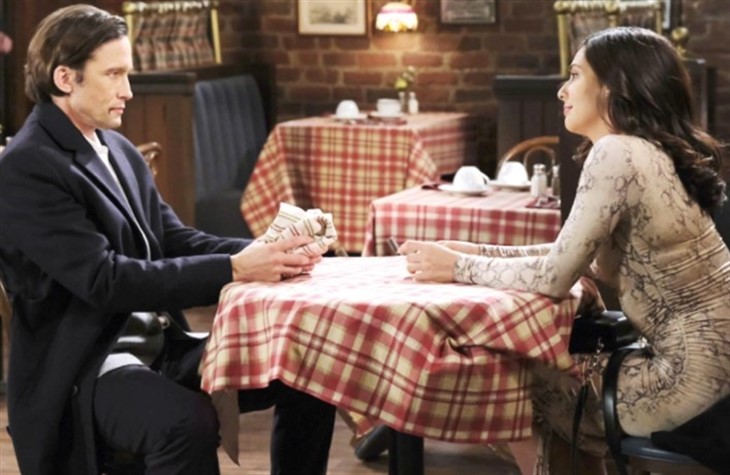 Days of Our Lives spoilers for May Sweeps reveal that Gabi Hernandez’s (Camila Banus) romantic future is confirmed. She recently went on a date with Philip Kiriakis (Jay Kenneth Johnson) but can’t stop thinking about Jake DiMera (Brandon Barash). So, which man will Gabi end up with? Head writer Ron Carlivati shared the details of what’s coming up next.

DOOL spoilers reveal that Jake was falling for Gabi before she fled to Mexico with her family. She couldn’t tell anyone she was hiding out because of her father’s association with some bad people. So, she broke his heart and was cruel to him. He moved on with Kate Roberts DiMera (Lauren Koslow). When Gabi came back, she thought her romance would pick up where it left off. However, that didn’t happen. Despite Jake still having feelings for Gabi, he is in denial and won’t admit it.

Gabi tried everything to get the man she desired but all her efforts failed. So, she used another tactic. She went to Titan and began a professional relationship with Philip. The two have become friends and Philip even asked her out on a date. It seems that he might be a bit smitten with her. After all, he’s the one who suggested she could get over Jake by jumping into a new relationship. Next week, Philip wants to take the romance to the next step.

Days of Our Lives spoilers reveal that Philip wants something more with Gabi. However, is she just using him to make Jake jealous? Or could she really be trying to move on with Philip? Perhaps it’s a combination of both. One thing that is known for certain is Gabi can’t get Jake out of her head.

As for Gabi’s romantic future, Jake isn’t going to be with Kate much longer. Kristen DiMera (Stacy Haiduk) wears a “Kate” mask and breaks up with him. That is the beginning of the path for Jake and Gabi to get back together, according to Carlivati. He told Soap Opera Digest that fake Kate dumping Jake is the beginning of Gabi finally getting the man she wants.

However, what does this mean for Philip? Will he fight for her or could Gabi be torn between the two men? What about when the real Kate tells Jake that she never broke up with him? Eventually, Kristen is going to get caught — along with her growing collection of masks. We will have to keep watching the NBC soap to find out what happens with this storyline.