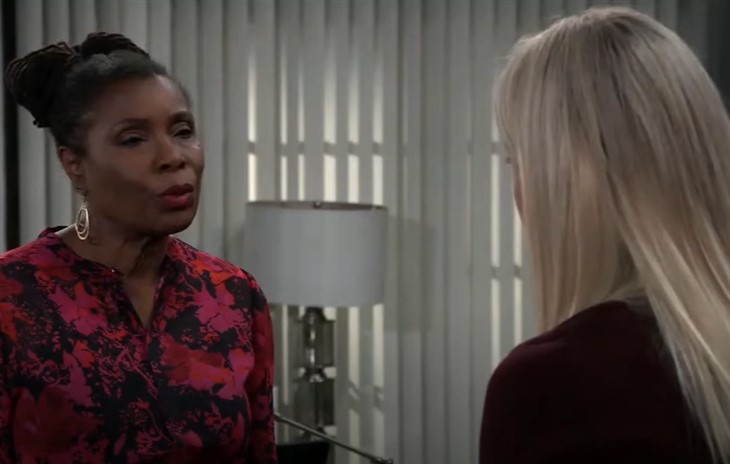 General Hospital spoilers and updates reveals Phyllis Caulfield (Joyce Guy) wants Nina Reeves (Cynthia Watros) to find happiness. Phyllis attended to Nina when she was in a coma years before. Phyllis thought that Nina’s mother Madeline Reeves (Donna Mills) wanted what was best for Nina. Nina had been pregnant before she went into her coma. Madeline had Phyllis give Nina’s daughter Nelle Benson (Chloe Lanier) to her adopted family.

Phyllis would find out that Madeline was the one to put Nina in her coma and did not want her to have her daughter. Phyllis has felt bad about her part in keeping Nina from her daughter and helped her find out that Nelle was her daughter. Nina had been in a relationship with Jasper Jacks AKA Jax (Ingo Rademacher). She ended her relationship with him because he kept the secret from her that Nelle was her daughter. Jax and Carly Corinthos (Laura Wright) kept the secret of how Nelle died from Nina as well. Nina left Port Charles to clear her head. She went to visit Phyllis in Nixon Falls, Pennsylvania.

Nina was not going to stay in Nixon Falls for long. She thought that she would travel to different places but changed her mind. Nina found out that Sonny Corinthos (Maurice Benard) is alive and has amnesia. Sonny is believed to be dead by his loved ones in Port Charles. Nina found out that Phyllis and her husband Lenny Caulfield (Rif Hutton) took Sonny in and gave him a job at their family business The Tan-O.

Nina was going to tell Carly that Sonny was alive but decided against it. Nina was upset after Carly told Nina that she would not get to be in Wiley Quartermaine-Corinthos’s (Theodore and Eric Olson) life. Wiley is Nelle’s son and Nina wants to be a part of his life. Nina does not know what she should do with the information that Sonny is alive. Nina has found herself getting closer to Sonny. She is trying to just be his friend. Phyllis can see that Nina and Sonny are getting closer. Nina had been on the phone with Jax who wanted to tell Nina that she could see Wiley. However, Phyllis took the phone and told Jax to let Nina go on with her life.

Phyllis and Lenny are friends with Elijah Crowe (Dan White). They have known him for years. The Tan-O was robbed and ransacked. Lenny and Phyllis did not know if they could pay to fix the bar. Elijah offered to buy the bar from them. Sonny was able to get the money together to pay for the damages. Elijah was not happy that he could not get the bar from Lenny and Phyllis. He is trying to find out about Sonny and his past. Elijah has met Nina. She wants to do an article on Nixon Falls for her magazine Crimson. Elijah has offered to show her the town. Phyllis believes that Elijah has Nina’s best interest at heart. Sonny is concerned about Elijah because he found out that Elijah has a criminal past.

General Hospital Phyllis wants Nina to be happy again. She likes both Sonny and Elijah. She does not know that they both have complex pasts. Will Phyllis try to bring Nina and Elijah together? She does not know that Elijah could be a danger to Nina. Will Phyllis want to help make Sonny and Nina a couple? Phyllis does not know that Sonny has Carly and his family back in Port Charles. Nina does know but is finding herself attracted to the man that Sonny is without his memories. Tune into General Hospital to find out if Nina gets into a relationship with Sonny or Elijah because of Phyllis.