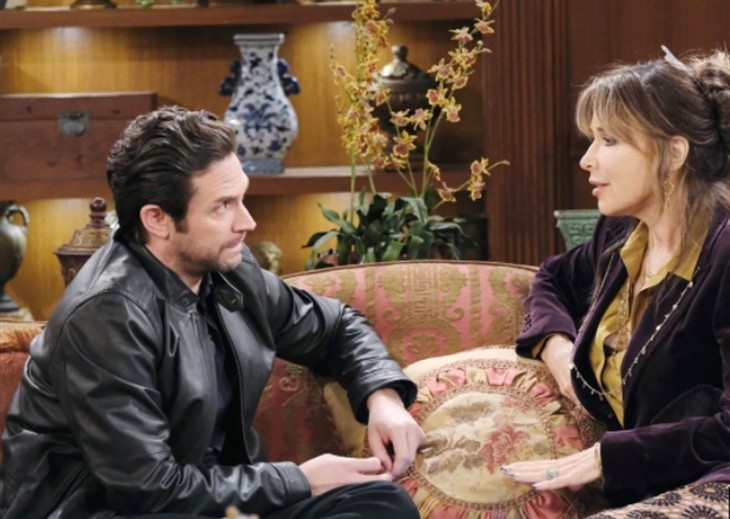 Days of Our Lives (DOOL) spoilers reveal Kristen DiMera going to extreme lengths once again as this time she goes after Kate Roberts — with the help of Dr. Rolf.

With masks being one of the most common things you’ll find in real life these days, the Salem Mask can do anything. Kristen (Stacey Haiduk) figured out Rolf’s (Will Utay) formula and managed to make a Sarah Horton (Linsey Godfrey) mask in record time. Now, she’s about to dig into that old bag of tricks once again.

Kristen is determined to break up Kate (Lauren Koslow) and Jake (Brandon Barash) because she doesn’t want Kate anywhere near DiMeras again. Since Kristen is not as creative and original as she thinks, she goes the mask route again and manages to get a Kate mask in record time.

As Kate, all she has to do is tell Jake she no longer wants him. Maybe she tells him it was a fling or perhaps she says she re-thought things and realizes their age difference just will not work. Jake will be devastated but Kristen will feel her mission has been accomplished.

Where will Kristen go from there? She could always create a Chloe (Nadia Bjorlin) mask and tell Brady (Eric Martsolf) she wasn’t thinking when she told him she’s in love with him again. In fact, this would probably have been the easiest thing for Kristen to do rather than running around town as Susan for the last few months.

After all, Kristen disguised as Susan means Susan has spent an awfully long time in jail when she never committed a crime.

Days Of Our Lives Spoilers – Will Jake Lambert And Gabi Hernandez Reunite?

But what about Kate and Jake? Will Jake set his sights back on Gabi (Camila Banus) now that Kate is no longer in his life? And what will happen when Kate eventually finds him and tells him she never broke up with him?

Jake might be confused and it also might be too late. Although Philip (Jay Kenneth Johnson) wants Gabi now, she might still choose Jake when she learns he is finally available. Stay tuned to Days of Our Lives weekdays to see how Kristen’s many plots play out.