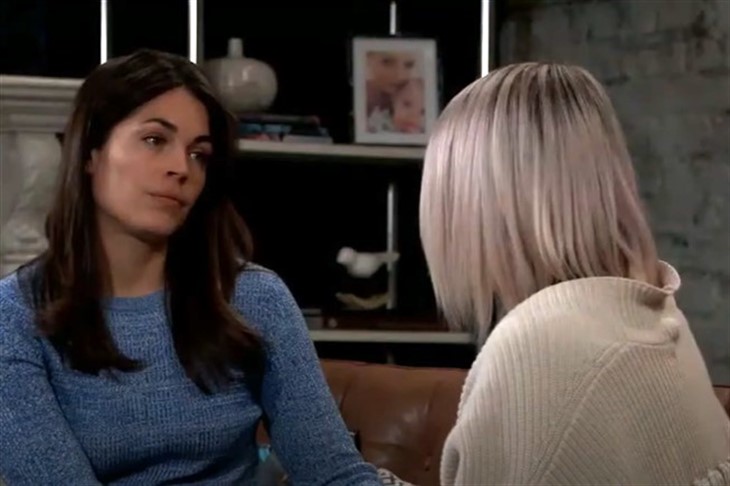 General Hospital (GH) Spoilers suggest that Maxie Jones’ (Kirsten Storms) baby death storyline is about to hit a major snag. Britt Westbourne (Kelly Thiebaud) is supposed to be there to help Maxie fake her baby’s death. However, Britt is about to be forced to go on the run leaving Maxie to fend for herself. Can Maxie pull of this switch with Brook Lynn Quartermaine’s (Amanda Setton) help?

General Hospital’s Britt and Maxie had formulated a plan to keep Maxie’s baby safe from Peter August (Wes Ramsey) by faking the baby’s death. Although the details had not been completely worked out, somehow the two women need to produce a dead baby girl to replace Maxie’s life one. Maxie and Britt also hadn’t figured out what to do with the baby once it arrived because Maxie needs to give her daughter away. However, Cyrus Renault (Jeff Kober) is after Britt and she has no choice but to run for her life. Will Britt enlist Liesl Obrecht (Kathleen Gati) to help in her absence?

General Hospital’s Brook Lynn needs a baby to get control of ELQ back for her family. Brook Lynn is using her child to get Valentin Cassadine’s (James Patrick Stuart) shares away from him. However, Brook Lynn isn’t pregnant and that creates a problem. However, Maxie needs someone to take her daughter to protect her from Peter. Maxie and Britt came up with the scheme to fake the baby’s death but they didn’t get far enough to find someone to take her. However, Maxie and Brook Lynn strike up a deal that is beneficial to both of them. Brook Lynn can give Maxie exactly what she needs. Brook Lynn can take Maxie’s baby and hide it right under Peter’s nose. However, they could certainly need some help to pull this off.

General Hospital Spoilers – Can This Plan Work Without Britt Westbourne?

Maxie and Brook Lynn could both be in danger if this plan goes wrong. Can they pull off this plan and keep Maxie’s child safe? Will the Quartermaine’s get the ELQ shares back?