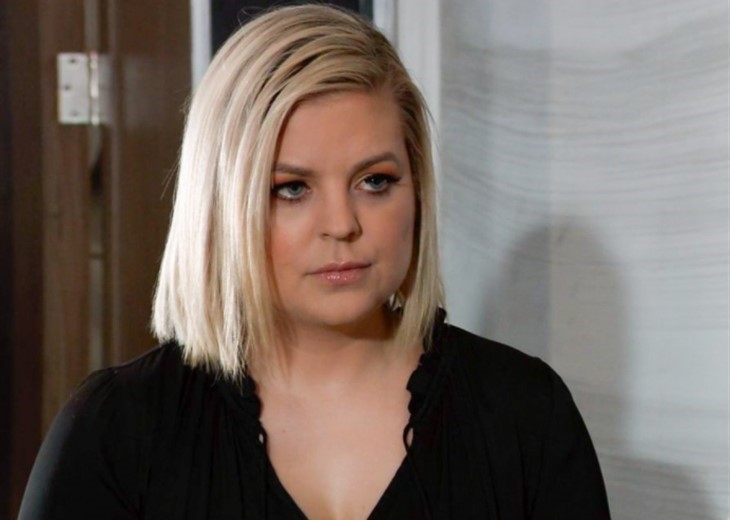 General Hospital (GH) Spoilers suggest that the week of April 26 – 30 of GH is full of intensity. Maxie Jones (Kirsten Storms) will get some unexpected help and ramp up her dead baby plan. What is in store for the residents of Port Charles?

General Hospital’s Carly has taken over the Corinthos mob since Jason Morgan (Steve Burton) was arrested for Franco Baldwin’s (ex-Roger Howarth) murder. Carly has gotten Jason stabbed with the help of Shawn Butler (Sean Blakemore) and now needs Brick’s (Stephen A. Smith) to help with the rest of her plan. What does Carly have in mind?

General Hospital’s Maxie is ready to move full steam ahead with her plan to fake her baby’s death. Maxie needs to keep her daughter safe from Peter August (Wes Ramsey). If Anna Devane (Finola Hughes) confides in Maxie that Peter poisoned Harrison Chase (Josh Swickard) that will certainly influence her decision. Maxie may see more than ever that she needs to save her child and move forward to do so. Maxie and Brook Lynn Quartermaine will join forces to con both baby daddies.

General Hospital’s Sonny Corinthos (Maurice Benard) will receive a surprise when Nina Reeves (Cynthia Watros) comes onto him and could suggest they make love. Nina is desperate to stay with “Mike” and keep him from returning to his family. How will Sonny react when he finally learns the truth?

General Hospital’s Valentin Cassadine (James Patrick Stuart) and Anna will get the upper hand when Valentin overhears a conversation that gives them a leg up on stopping Peter. Will Peter die sparking a mystery of who killed Peter?

General Hospital’s Sam McCall (Kelly Monaco) has been keeping her distance from Jason. Sam decided that she and Jason needed to separate because of the children. Sam will arrange for Danny Morgan (Porter Fascullo) to visit his father after leaving he was stabbed in prison. Sam may decide that Danny needs to see his father in case this is the last time he sees him alive.

General Hospital’s Laura Collins will grow concerned about former daughter-in-law Liz Baldwin (Rebecca Herbst). Laura has been concerned since Franco’s death. However, now that Nikolas is in bed with Cyrus, Laura will be afraid that Liz could become bait. Peter could also target Liz since almost everyone knows that he killed Franco. Unfortunately, Liz’s job may be at stake as well. Could Britt fire Liz after she helps Hamilton Finn (Michael Easton) try to save Chase’s life?