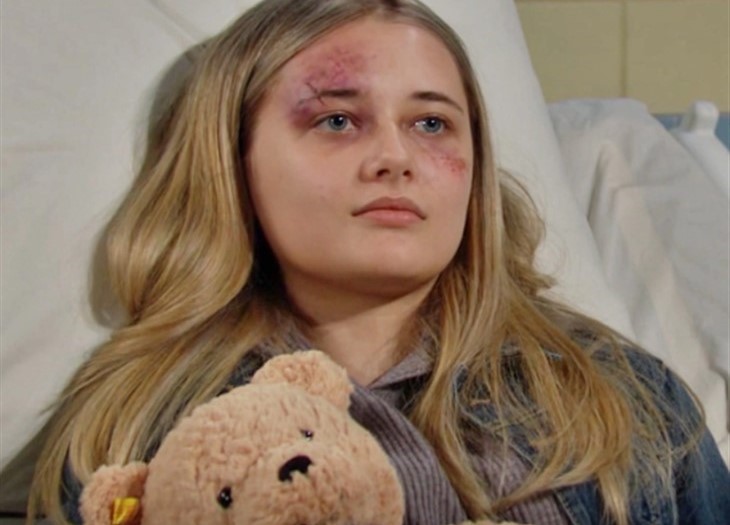 The Young and The Restless (Y&R) spoilers and rumors tease that Faith Newman (Reylynn Caster) will collapse in an upcoming episode of The Young And The Restless, and Nick Newman (Joshua Morrow) will be forced to make a choice. Faith’s kidneys will fail and she’ll need a transplant. Is Adam Newman (Mark Grossman) the only possible donor?

Viewers of The Young and The Restless will recall that Faith recently was in a serious automobile accident but she was cleared to be released from the hospital. Nothing appeared to have shown up to indicate that her kidneys had been injured, and she collapses in an upcoming episode of The Young and The Restless after seeming to recover fully from the wreck. Faith gives everyone a scare on the morning of her first rehab appointment, although Sharon Rosales (Sharon Case) does notice she doesn’t look well. She wants to know if Faith drank any alcohol and could be hungover, and she assures her mother that she didn’t.

Nikki Newman (Melody Thomas Scott) who is supporting Faith and sponsoring her for her sobriety meetings is there also and they decide to go by Crimson Lights on the way to the rehab appointment. Faith suddenly faints, and Sharon and Nikki are helping her to a chair when Nick shows up. They are worried, and Elena Dawson (Brytni Sarpy) happens to be there on the patio so they ask her to take a look at Faith. The family is alarmed when Elena tells them to call 911 and that she needs to get to the hospital right away!

Sharon worries there could still be traces of thallium in the house and Nick is suspicious of the same thing. They cannot rule out that Faith could have been exposed to thallium from Rey Rosales’ (Jordi Vilasuso) poisoning! Soon, Dr. Nate Hastings (Sean Dominic) emerges from the double doors of the emergency room into the waiting room where he has grim news!

Y&R Spoilers And Rumors – Faith Newman Is In Kidney Failure

Nate tells Nick, Sharon and Nikki that Faith is in kidney failure and will need a transplant! Both of her kidneys have failed! A person can live with one kidney so she will be okay if only one can be found, but until then she will need to remain in the intensive care unit on dialysis. Nick asks about thallium, and Nate tells him that while ingestion of thallium could cause renal failure, trace amounts usually don’t although it can build up. He treated Rey too, so it came to his mind as well, but since Faith’s kidneys, which filter the blood, are not working, blood tests would not give them the answer.

The Young And the Restless Comings And Goings: A Vindictive Character Returns & A Recast Of A Major Player #YR #YoungandRestlesshttps://t.co/oH8C5deurl

The kidneys would have to be biopsied for toxins after they are removed. Nick, Sharon, and Nikki are all tested immediately for possible kidney donation but none are a match. Sharon says Mariah Copeland (Camryn Grimes) is out of the question because of her pregnancy, but Nick calls Summer Newman (Hunter King) and Nikki calls Victor Newman (Eric Braeden) and Victoria Newman (Amelia Heinle). All are willing to be tested and no one is a donor match.

All agree that Victoria’s children are out of the question as well, and Victor notes the only one left is Adam! Nick explodes – Adam is probably out of the country and not able to be found, although Sharon knows how to contact him, and Victor thinks he knows where he is. Nick has to make a choice – of course, he hates Adam, but he admits he saved Faith’s life before when she was in the wreck, and perhaps he can save it again by donating a kidney! Sharon excuses herself and makes the call. It will be up to Adam whether he risks capture to come to the hospital, but she will help him all that she can.