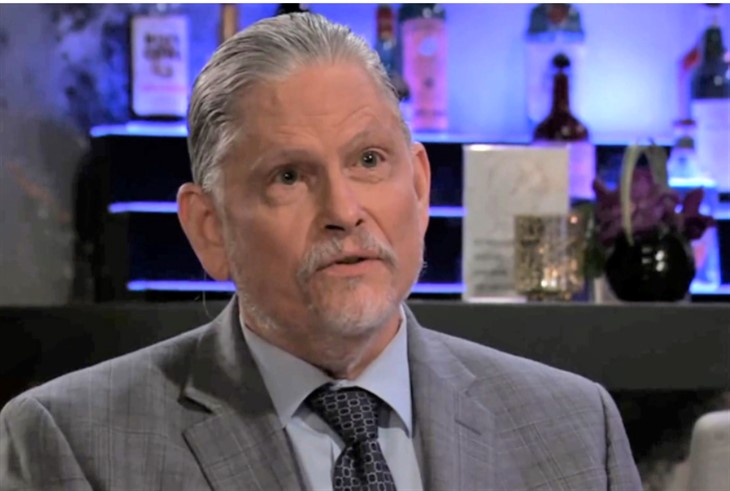 General Hospital (GH)spoilers tease that Cyrus Renault (Jeff Kober) will be livid when he finds out Jason Morgan (Steve Burton) and Dr. Britt Westbourne, (Kelly Thiebaud) his chief of staff are both missing in an upcoming episode of General Hospital!

General Hospital viewers will remember that Cyrus had planned to have Jason eliminated all along since Jason has been the worst threat to his not-so-hidden drugs network. That is the real business that he has been running behind the scenes of General Hospital while he has been putting on airs and a façade of a respectable businessman and philanthropist! Just like every mobster since Al Capone, he has been using the hospital as a front to launder dirty money and dirty drugs! General Hospital viewers will remember that although Sonny Corinthos’ (Maurice Benard) territory sometimes had some questionable merchandise flowing through it, it was never drugs.

That is the one thing that Sonny would not allow to come into or through his territory, and that is why Cyrus has been fighting for Sonny’s territory. He tried to have Julian Jerome (William DeVry) kill Jason by blowing up The Floating Rib but that blew up in Cyrus’ face because Jason had left the venue and Cyrus tricked Julian into calling him from a burner phone that actually was the trigger for the bomb he had left inside! Carly Corinthos (Laura Wright) had gotten her and Jason some leverage when she had Damian Spinelli (Bradford Anderson) hack into the Mountain Landing Care Home system to effect a “transfer” of Cyrus’ mother, Florence Grey (Annie Abbott) to a Corinthos safe house in Port Charles, where Carly’s mother, Bobbie Spencer (Jacklyn Zeman) was caring for her.

But since Nikolas Cassadine (Marcus Coloma) found her and returned her to Cyrus, Carly and Jason’s leverage was gone. Carly had Shawn Butler (Sean Blakemore) stab Jason in Pentonville Prison, where he was taken to General Hospital, under Britt’s care. But just when Cyrus is ready to have Jason eliminated, not only Jason but Britt have disappeared!

General Hospital viewers will recall that when Carly and Britt were with Jason in his hospital room, Carly wanted Britt to help Jason escape – and Jason said no! However, Britt, on her own was determined to get Jason to safety – and herself, because Cyrus had caught her looking at his drug he’d tried to push on her laptop and denied access. But Britt formulated her own plan, without involving Carly; Carly was concerned that Britt couldn’t be trusted because of things she did in the past. Britt likely works with her mother, Liesl Obrecht (Kathleen Gati), and uses her contacts to get Jason and herself to a medical facility outside of the United States.

They have to make sure that it isn’t one where Peter August (Wes Ramsey) has any contacts, and right now Liesl has more clearance with the WSB than Anna Devane (Finola Hughes) has, who has also been working with Carly on the Cyrus/Peter situation after Jason sent Anna to Carly. General Hospital viewers will remember a couple of years back there was a WSB medical facility in Canada where Cassandra Pierce (Jessica Tuck) had been treated, although some henchmen managed to get her to their own facility, also in Canada, where Anna had been lured to as bait for Dr. Hamilton Finn (Michael Easton) so he would go and try to bring Cassandra out of her coma.

This could be the same WSB medical facility where Britt and Jason go, and he will be able to recover there and she will also receive a diagnosis for her shaky hand – likely at Jason’s insistence. The two have bonded and had one another’s backs. But as for Cyrus, he is livid when his plans are foiled and he strikes out at the only person he can who might know where Jason went – Carly!