Days Of Our Lives (DOOL) Spoilers: Lani Grant Comes To A Heartbreaking Decision Regarding Kristin DiMera! 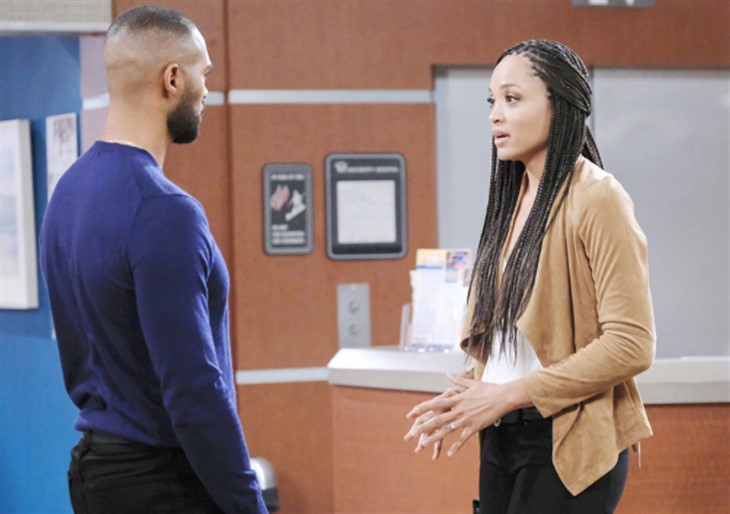 Days of Our Lives (DOOL) spoilers tease that the unlikely friendship between Lani Grant (Sal Stowers) and Kristen DiMera (Stacey Haiduk) is about to be tested once again and this time it may be damaged beyond repair. As viewers will remember, Lani and Kristen became friends will becoming to become nuns afterlife in Salem became too much for either one of them. Both of them eventually felt the call to return to Salem, without taking their final vows. And while Lani and Eli Grant (Lamon Archey) eventually reunited and not only did they get married, but they just welcomed twins into their family.

Days Of Our Lives Spoilers – Kristen DiMera’s Violent Urges Led Her To A Prison Sentence!

In the meantime, Kristen was able to reunite not only with Brady Black (Eric Martsolf) but with their daughter who was believed to have died shortly after childbirth. In reality, Victor Kiriakis (John Aniston) secretly masterminded a baby swap. Kristen and Bray were reunited with their daughter, but Kristen’s anger with Victor ended in a violent confrontation during which Kristen stabbed Victor and left him to die. Not wanting Kristen to have to spend any more time away from her daughter, Lani helped Kristen escape police custody and Kristen and Brady left town with their daughter.

Days Of Our Lives (DOOL) Spoilers: Eric’s News Sends Nicole Back To Her Old Ways

DOOL Spoilers – Eli Grant Was Forced By The District Attorney To Get A Confession From Kristen DiMera In Order To Keep Lani Grant Out Of Prison!

Kristen and Brady secretly returned to Salem after Brady’s father, John Black (Drake Hogestyn) became hospitalized after having a brain aneurysm. The district attorney discovered that Lani had illegally helped Kristen get out of police custody. Instead of arresting Lani, DA Melinda Trask (Tina Huang) threatened to do exactly that unless Eli not only arrested Kristin but obtained a taped confession with Kristen admitting that she tried to kill Victor. Eli succeeded but Lani was furious with her new husband. It was at this point that Kristen realized that as a mother now, she needed to take responsibility for her criminal past. Kristen was sentenced to fairly light imprisonment of three years. Although heartbroken that she would miss so much time away from Brady and their daughter, Kristen seemed ready to serve time and pay for her actions for perhaps the first time in her life!

Days Of Our Lives Spoilers – Kristen DiMera Is Once Again Embracing Her Dark Side!

A few months later, Kristin saw a picture in the newspaper of Brady kissing his ex-wife Chloe Lane (Nadia Bjorlin). It was just an amicable New Year’s Eve kiss and Kristin seemed ready to just let it go. But it didn’t last and Kristen took a couple of hostages to find Brady and see for herself. Brady had been shot in the chest but would recover. Kristen was relieved but her anger came to a boiling point when she saw Chloe at the hospital. She held a gun on Chloe and threatened to kill her, but she regained a bit of control and was taken back to prison. But things are getting worse by the day as Kristen has convinced her lookalike Susan Banks (also Stacey Haiduk) to take her place in prison while Kristen, disguised as Susan does everything in her power to keep Chloe and Brady far apart!

Susan had only agreed to switch places with Kristen for a month. That deadline has already passed. It probably won’t be long before Kristen is exposed. When Sarah Horton (Lindsey Godfrey) saw Kristen out of disguise, she knocked Sarah out basically abducted her to an island prison. In the process, she had to disguise herself as Sarah and slept with Rex Brady (Kyle Lowder) in the process. But what happens once Lani finds out? Could she do the same thing to her that she just did to Sarah? It will break Lani’s heart but she will soon realize she can’t enable Kristen any longer. Look for Lani to cut all ties with Kristen but Lani won’t see any other choice.

How much longer will Kristen remain free while poor Susan is sitting in jail? Will Sarah ever be rescued? Will Kristen realize that she has made everything so much worse? Will Lani have to find out firsthand that Kristen is willing to hurt anyone who gets in her way? In Salem, some people are their own worst enemy so be sure to watch Days of Our Lives, airing weekdays on NBC. And don’t forget to check back right here regularly for all your Days of Our Lives news, information and spoilers!