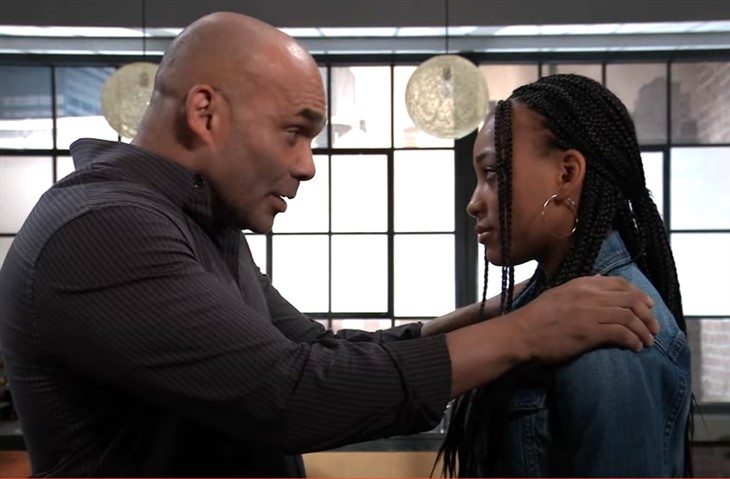 General Hospital Spoilers suggest that Marcus Taggert (Asante Jones) and Jordan Ashford (Briana Nicole Henry) will grow closer as they are living together. Jordan is in the middle of a divorce with Curtis Ashford (Donnell Turner) caused partially by her working with Taggert and keeping secrets. Will things turn romantic between the former partners?

General Hospital’s Jordan Ashford Is Hurting and Taggert feels partly responsible. After all, if Jordan hadn’t kept the secret that Taggert was alive, she and Curtis might still be together. Jordan told so many lies to protect Taggert that she and Curtis could not get past them. Taggert is living with Jordan and will be there to pick up the pieces and help Jordan get through this divorce. However, the two are good friends and could certainly bond over this closeness. Will Taggert and Jordan get into a romantic relationship now that they are living together? After all, Taggert could be there for some time.

General Hospital’s Trina Robinson (Sydney Mikayla) wants to visit her father. Trina isn’t very fond of Jordan but has no choice but to visit Taggert at her house since he is under house arrest. Trina also doesn’t like to think of her father in a relationship with any woman other than her mother. Trina may not be very happy if Jordan and Taggert begin a relationship at all. Unfortunately, Trina cannot control what her father and Jordan do. Jordan and Taggert also have no control over their feelings. Trina may stop by at a very inopportune time and catch Taggert and Jordan in a compromising position. This could cause more tension between Trina and her father. Will Taggert and Jordan survive a relationship if Trina opposes it?

General Hospital’s Portia Robinson is rumored to reconnect with Curtis as well. Curtis and Portia had an affair years ago. Curtis even questioned if Trina could be his daughter at one time. Now Trina could have to deal with both parents in new relationships. Are there more revelations in Trina’s future? Could Trina’s father turn out to be Curtis instead?

General Hospital’s Trina may be glad to have the distraction of college if her parents fall for other people. Trina isn’t likely to want to be around for either of their relationships. Will Trina have to learn to live with Jordan and her father as a couple?