The Bold And The Beautiful (B&B) Spoilers: Zoe Talks To Eric For Quinn, Will Quinn Betray Her With Carter? 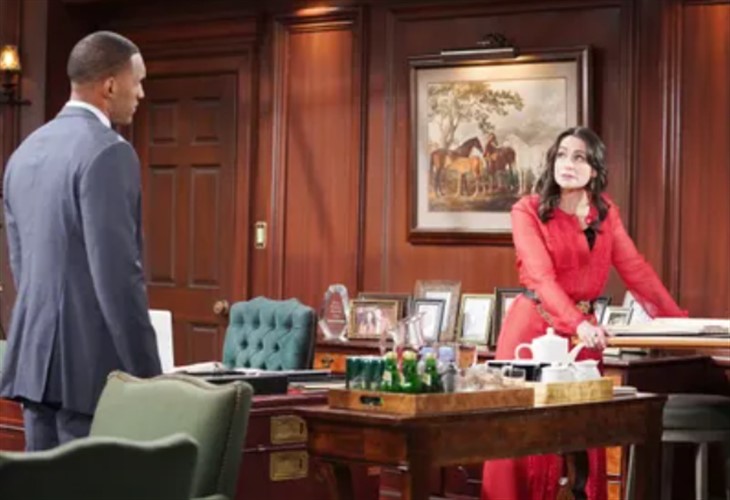 The Bold And The Beautiful (B&B) spoilers indicate that Zoe Buckingham (Kiara Barnes) will try to return the favor for Quinn Forrester (Rena Sofer) and talk to Eric Forrester (John McCook) on her behalf. After all, Quinn has tried to help Zoe and Carter Walton (Lawrence Saint-Victor) get back together. However, Zoe could be in for a shock when Quinn gets too close to Carter.

The Bold and The Beautiful’s Zoe has been very vindictive, especially when it comes to her sister Paris Buckingham (Diamond White). Zoe even became friends with Quinn over her jealousy of her sister. Quinn offered to try to help Zoe get back with her ex-finance Carter. However, now Quinn is taking a step back and trying to discourage Zoe. Although Zoe thinks Quinn supports her, Quinn seems to have other plans in store for Carter after visiting his apartment on Zoe’s behalf. Is Zoe making a mistake by trusting Quinn? Should Zoe even bother to try and help?

The Bold And The Beautiful (B&B) Spoilers: This Is What Katherine Kelly Lang Really Wants To Do

The Bold and The Beautiful’s Eric seemed to be bothered by Zoe’s presence at his home just a few days ago. Zoe showed up looking for Zende Forrester (Delon De Metz) after her breakup with Carter. Eric was not happy about her just dropping by, especially when she was looking for Zende. Eric isn’t likely to take Zoe’s advice very seriously either. However, Zoe feels like she owes Quinn and will make an effort to use her situation with Eric to point out how wrong his relationship could go. Will Zoe convince Eric to take Quinn back?

The Bold And The Beautiful’s Quinn seems to be extremely attracted to Carter after visiting him the other day. Quinn is not getting what she needs at home and Carter is hurting. While Zoe is trying to help Quinn get back with Eric, Quinn could be making a move on Carter. Quinn has discussed her and Eric’s lack of intimacy with Carter and may return to talk to him again. However, the sexual tension that both of them have been feeling could lead to Carter and Quinn jumping into bed together.

Will Quinn betray her newfound friendship to sleep with Carter? Will Carter overlook years of loyalty to the Forresters to sleep with Quinn? Will Eric decide his marriage is worth saving and reunite with his wife?