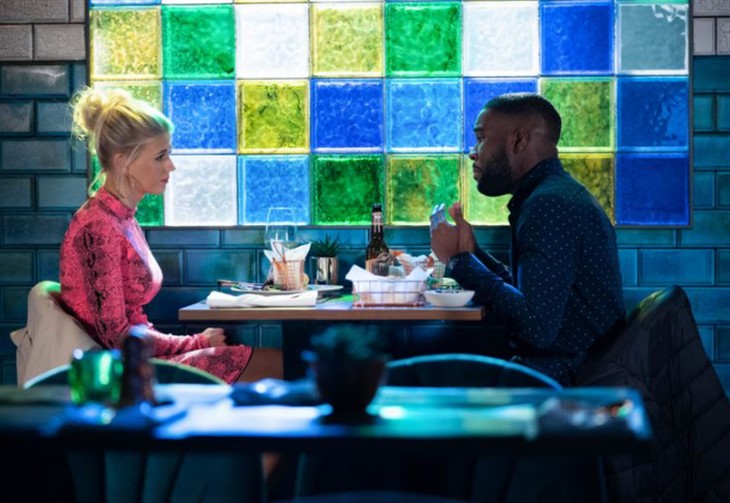 EastEnders spoilers reveal that Lola Pearce (Danielle Harold) will grow increasingly worried about his boyfriend, Isaac Baptiste (Steve Basaula), health after he decides to stop taking his medications. She’ll ask him to consult his doctor but will he listen to her?

Isaac has been asking around about the death of his half-brother, Paul Trueman (Gary Beadle). Patrick Trueman (Rudolph Walker) told him everything he needed to know about Paul’s death back in 2004, and that he was often misunderstood.

After learning about all these, Isaac starts to question if he’s like his brother. He starts to wonder if he’s also misunderstood and if he was misdiagnosed with schizophrenia. He then decides to ditch his medications.

Next week, Isaac will start to act differently. Lola notices the change in his behavior after he rips down a poster of Bailey Baker (Kara-Leah Fernandes). Plus, he’s not sleeping well, too. She asks her boyfriend what’s going on and learns that he believes he’s been misdiagnosed. Isaac also confesses that he has stopped taking his medications.

Isaac wants Lola to drop the subject but she says she’ll only do that if he promises to talk this over with his doctor. Fans need to stay tuned to find out if he’ll keep his promise.

Earlier this month, Isaac’s portrayer, Basaula opened up about his character’s reaction after learning about the circumstances that led to the demise of his late brother.

“When he learnt about his new family he didn’t know what exactly had happened to Paul, so to find out that he had been murdered and it had almost been ignored because of Paul’s troublesome history was rather hurtful and a surprise to him,” Basaula explained.

These discoveries make him question his diagnosis, he added.

“I think the appeal for Isaac is the possibility for what some may describe as a ‘normal’ life – for him, that’s a life without schizophrenia, so if he has been misdiagnosed, he’s desperate to know and makes a very risky choice to test out his theory.”

Meanwhile, Callum Highway (Tony Clay) is disappointed to learn that Whitney Dean (Shona McGarty) can’t go to his wedding. The latter think that Kush’s Kazemi (Davood Ghadami) death wasn’t accidental. Callum believes that Ben Mitchell (Max Bowden) doesn’t have anything to do with it but he starts to waver when he overhears Ben planning a meeting. Next week, Callum and Stuart will receive a special visitor who won’t be impressed with Ben.

Elsewhere, Mitch Baker (Roger Griffiths) becomes irate when the police ask to check their house again for information that can help find Bailey. He also agrees to participate in a TV press conference to ask for the public’s help regarding Bailey’s disappearance.

Be sure to catch up on everything happening with Eastenders right now. Come back here often for Eastenders spoilers, news, and updates.