The Bold And The Beautiful (B&B) Spoilers: Brooke Helps Donna Woo Eric, Get Revenge On Quinn 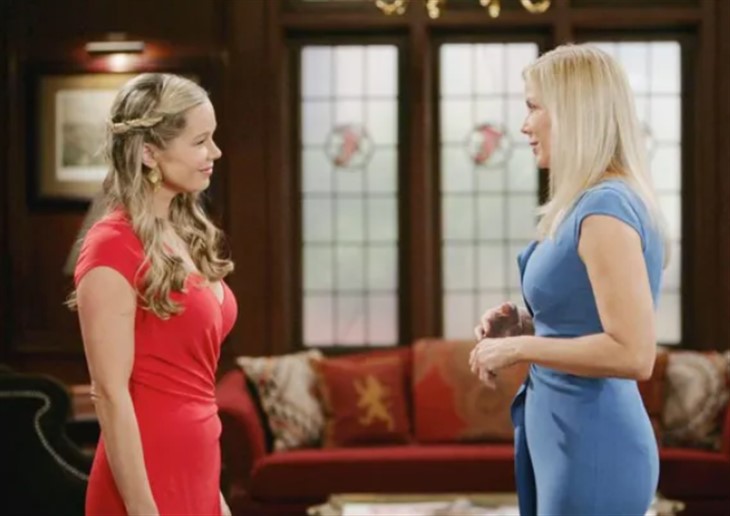 The Bold and the Beautiful (B&B) Spoilers indicate that the rivalry between Brooke Logan (Katherine Kelly Lang) and Quinn Fuller (Rena Sofer) will once again heat up.

The two women had a tense feud last year. Their issues stemmed from Brooke not trusting Quinn and believing she was dangerous. When Brooke tried to convince Eric Forrester (John McCook) to divorce Quinn, the jewelry designer didn’t like Ms. Logan interfering in her marriage.

Although the women had their moments of scheming against each other, their feud has seemingly cooled off. At least for now.

Quinn’s last scheme against Brooke almost cost her her marriage to Eric. But after some convincing from Shauna Fulton (Denise Richards), Eric decided to take Quinn back. However, their reunion may be short-lived.

The couple is experiencing problems in the bedroom. Quinn and Eric’s issues have led them to confide in others. Quinn’s leaning on her new friend Carter Walton (Lawrence Saint-Victor), while Eric turns to ex-wife Donna Logan (Jennifer Gareis).

Eric and Donna’s upcoming scenes have fans convinced a reunion is in store for the two. And of course, one can expect Brooke to get involved.

Upon learning of Eric and Donna’s recent interaction, Brooke will use this to her advantage.

Brooke knows how much Donna still loves Eric and will set in motion a plan to reunite the two. Her sister’s happiness is important and if Eric is what makes Donna happy, then Brooke’s going to encourage the reunion. In Brooke’s mind, Donna is a much better fit for Eric than Quinn.

Although Donna thinks Brooke’s looking after her best interest, what she doesn’t know is she’s becoming a pawn in Brooke and Quinn’s rivalry.

Brooke’s past attempts at convincing Eric to divorce Quinn have fallen on deaf ears. Despite their past obstacles, Eric is committed to Quinn. However, he’s going to be tempted when Donna steps up her seduction to win back her Honey Bear.

Brooke knows that losing Eric will destroy Quinn. What better way to get revenge on her nemesis than by destroying her marriage. Given how Quinn tried to break up with her and Ridge Forrester (Thorsten Kaye), Brooke feels justified in her actions.

The Bold And The Beautiful Spoilers – Quinn Fuller Fights Back

Quinn will now have the odds stacked against her as she goes into battle with two Logan women. With Donna and Brooke out to sabotage her relationship with Eric, Quinn’s going to be furious.

She’s not going to give up without a fight. She’s tired of the Logan women always getting their way. It’s time they got payback, and Quinn the person to dish it out.

While Brooke and Donna think they may have Quinn beat, their victory party isn’t going to last long. They’ll find themselves in turmoil as they endure Quinn’s wrath, and the consequences may be dangerous.