Days Of Our Lives (DOOL) Spoilers And Rumors: Nicole Holds Key To The Identity Of Charlie’s Murderer? 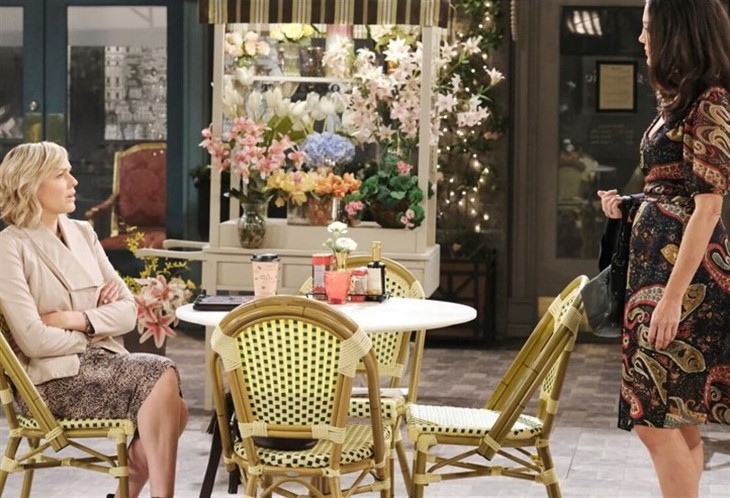 Days of Our Lives (DOOL) spoilers tease that Nicole Brady (Arianne Zucker) may hold the key to the identity of Charlie Dale’s (Mike C. Manning) true murderer, and she may reveal it in an upcoming episode of Days of Our Lives!

Days of Our Lives viewers will recall from a recent episode of Days of Our Lives that as Nicole was sitting at a table in Horton Town Square, Jan Spears (Heather Lindell) approached her. Nicole was sitting there minding her own business and Jan just invited herself to sit with her! Nicole didn’t tell her to take a long walk off of a short pier, but she was visibly annoyed just the same. The first thing she wanted to know is why Jan wasn’t in jail after having woken up from her coma and released from Bayview sanitarium.

She told Nicole about the deal she made with Belle Brady (Martha Madison). Days of Our Lives viewers will recall that John Black (Drake Hogestyn) had nearly strangled Jan in a fit of temper, which wasn’t long after he had recovered from his brain aneurysm. This happened in November 2020 when Jan had taken Belle hostage and crashed her wedding to Shawn Brady, (Brandon Beemer) dressed in Belle’s wedding dress! The topic of Belle being arrested for the murder of Charlie Dale came up, and Jan sang like a canary about how awful it was that Claire Brady (Isabel Durant) had been terrorized by Charlie and that if Belle hadn’t rushed in to save her, it could have been “her Claire” that had died!

The only problem is that Jan was supposedly in a coma at that time – that happened in February 2021. Claire didn’t tell her details when she talked to her a few days earlier, just that Charlie had turned out to be a bad guy! Claire had returned the crystal to Jan that she had given her, she wanted nothing of Jan.

Days of Our Lives viewers will recall that Nicole had gone to Rafe Hernandez’ (Galen Gering) house to tell him something the same day, after the terse conversation with Jan. However, she was distracted by finding out that Ava Vitali (Tamara Braun) was there and a conversation had taken place about Ava and Rafe’s kiss. Days of Our Lives viewers know that Charlie’s murderer was Jan and that she somehow had gotten Belle’s red coat, or one exactly likes it and was wearing it when she killed him.

Whether she set out to kill him or not is a question, because Allie Horton (Lindsay Arnold) had left her grandmother Kate Roberts’ (Lauren Koslow) gun at the scene, which ballistics did show was the gun that killed Charlie. Unless – Jan shot him with a different gun and somehow the bullet from it was not found in the autopsy. Only the bullet from Kate’s gun was found and put in evidence, along with the red button.

Jan either set out to frame Belle for the murder or she took advantage of a situation and grabbed Kate’s gun and killed him. But once Nicole thinks about the timeline and the things Jan told her, she will know the truth – the timeline proves that Jan knew things she should not have known had she still been in a coma, and that is the key to solving the murder!