The Young And The Restless (Y&R) Spoilers: Faith Needs A Kidney Transplant, Adam Comes To The Rescue 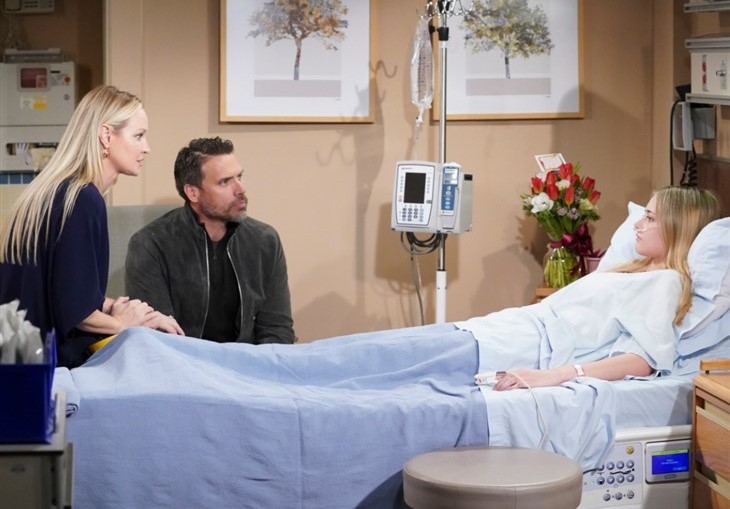 The Young and the Restless (Y&R) spoilers indicate that Faith Newman (Reylynn Caster) will face a medical crisis.

This week Nick Newman (Joshua Morrow) and Sharon Newman (Sharon Case) worry about their daughter when she collapses. Faith’s fainting spell comes weeks after she was involved in a car crash which almost cost her her life. Now, the teen is facing another terrifying situation.

The Young And The Restless Spoilers – Faith’s Needs A Transplant

Following Faith’s fainting spell, she’s rushed to the hospital where Nate Hastings (Sean Dominic) delivers grime news. Faith has an infection that’s causing kidney damage. The only option for the young girl is to have a kidney transplant.

The Newman’s quickly get tested to see if they’re a possible match for Faith. However, Nate says that with Faith’s rare blood type, finding a donor will be challenging. But Sharon and Nick’s prayers will soon be answered.

Upon learning about Faith’s condition, Victor Newman (Eric Braeden) reveals someone he knows that can help. That person is none other than Adam Newman (Mark Grossman).

The Young And The Restless (Y&R) Spoilers: Adam’s Name Cleared – Victor Is Vindicated

Adam being Faith’s donor is going to have some hitches to it. There’s a lot of bad blood between Nick and Adam, but with his daughter’s life at risk, Nick will do anything to save her.

However, getting Adam back to Genoa City will be tough. He’s currently on the run after being accused of poisoning Rey Rosales (Jordi Vilasuso). As fans know Adam’s being set up by his wife Chelsea Lawson (Melissa Claire Egan). But Rey’s hatred towards Adam has him convinced the Newman heir is responsible, and he’s on a mission to nab the fugitive.

With Rey on the prowl, Adam’s gone into hiding. However, upon learning about Faith’s medical crisis, may have him returning to Genoa City.

Adam cares about Sharon and would do anything for her. With Faith’s life hanging in the balance and him the only donor match, Adam would be more than willing to help. However, there’s the issue of Rey.

Adam knows the minute he steps foot in town, Rey’s going to be ready to arrest him. Rey is the one who may stand in the way of Adam donating his kidney to Faith.

The Young And The Restless Spoilers – Will Rey Rosales Put His Hostility Aside?

The Newmans know it’s going to be difficult sneaking Adam back into Genoa City. If Rey gets word that Adam’s back, it’ll mean big trouble.

Rey’s main focus is on capturing Adam, and his hostility could prevent the kidney transplant from happening. Rey’s insistence on arresting Adam is going to cause further problems with him and Sharon.

Sharon’s main concern is her daughter’s well-being. Yet, Rey’s desire to get payback on Adam may delay Faith’s kidney transplant. When Sharon learns of Rey’s actions, she’s going to be upset. She knows how much Rey loves Faith, but she doesn’t understand why he’s not thinking of her needs in this situation. For once, she hopes Rey can put his feelings for Adam aside for Faith’s sake.

Be sure to catch up on everything happening with Y&R right now. Come back here often for Young and the Restless spoilers, news, and updates