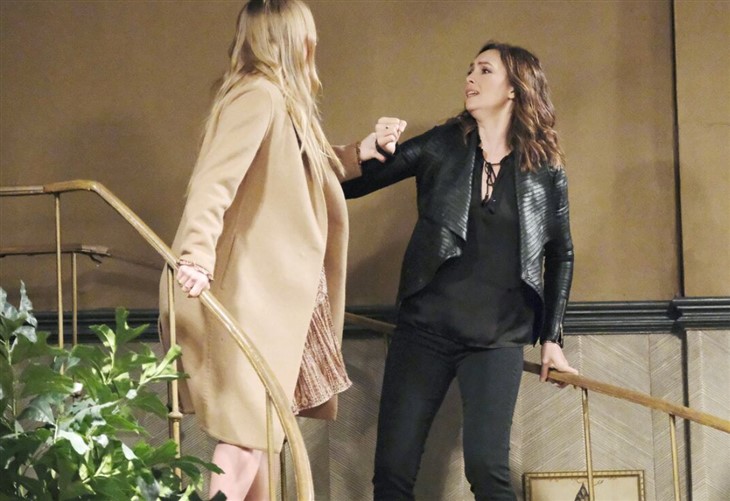 Days of Our Lives (DOOL) spoilers reveal that Gwen Rizczech (Emily O’Brien) and Abigail DiMera (Marci Miller) have a violent showdown. At the top of the DiMera staircase, Abigail grabs her sister and shakes her. When she lets go, Gwen falls to the bottom floor and is unconscious. Instead of calling for help, Abigail flees the crime scene and there could be consequences.

DOOL spoilers reveal that Gwen has decided to keep the baby. However, it has nothing to do with hurting Abigail. It’s not even about Chad DiMera (Billy Flynn). Gwen realizes that she doesn’t need to compete with her sister to have a real family. She can finally create her own family unit. She actually plans on leaving Salem and wants to turn her life around. She makes all kinds of plans about being a proper mother, making sure her child knows they are loved, and even redeeming herself one day.

However, she suddenly gets the feeling that something is wrong. She goes to the hospital and gets checked out by Dr. Snyder (Michael Lowry). He informs Gwen that she miscarried. All of her hopes vanish and she is filled with anger, grief, confusion, and resentment.

Gwen goes to tell Chad that Abigail got what she wanted and her baby is dead. However, Chad isn’t at the DiMera mansion. Abigail is, though, and he starts bullying Gwen and screaming at her. Gwen tries to get away because she just doesn’t have it in her to fight at the moment. Then, Abigail gets physical. While they are both at the top of the stairs, Abigail grabs her sister’s wrists and starts shaking her. When she suddenly let’s go, there is only one way for Gwen to go and that is down.

Days of Our Lives spoilers reveal that Abigail is horrified to see Gwen lying at the bottom of the stairs. She appears to be unconscious but Abigail has learned that what you see isn’t always what you get with Gwen. She could be faking or she could be dead. Knowing exactly what this will look like, Abigail runs off. She leaves Gwen’s body lying on the floor and doesn’t call for help.

Later, Chad and Jack Deveraux (Matthew Ashford) walk in and are horrified to find Gwen’s body. They rush over to see if she is okay and call for an ambulance. At the hospital, Chad is with Gwen when she regains consciousness. She mumbles about losing the baby. Despite Chad not wanting the child, he feels terrible for Gwen’s loss. He is also concerned about how Gwen ended up unconscious in the first place.

He knows that Abigail is not mentally stable right now and is unable to make moral decisions. He also knows she tried to force Gwen to get an abortion. Chad also recalls Abigail saying eliminating Gwen is worth prison time and losing her own children. So, it’s not a stretch to assume Abigail caused Gwen’s fall and miscarriage. What nobody realizes is that Gwen already lost the baby by the time she encountered Abigail. Unless the truth comes out, Abigail could face criminal charges.