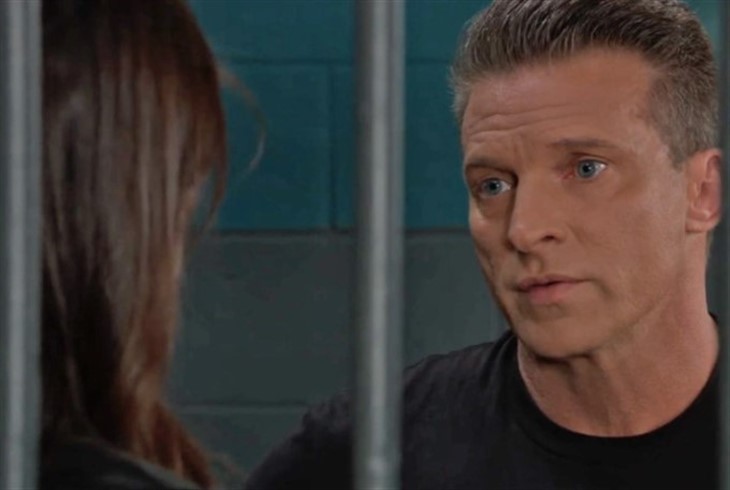 General Hospital (GH) spoilers suggest that things could get downright stick in Port Charles the week of May 3-7. For starters, Jason Morgan (Steve Burton) will go on the run while everyone tries to prove that Peter August (Wes Ramsey) framed him. Will Britt Westbourne (Kelly Thiebaud) be along for the ride?

#1 Jason Morgan Is On The Run

General Hospital’s Jason is going on the run to keep himself from getting killed. Jason believes that this is an unnecessary move because he can take care of himself in Pentonville. However, Carly won’t hear of anything else and even had him stabbed to get him to G.H. Jason seems to have no choice but to go along with the plan before Carly makes matters even worse. However, it seems that Jason will have to take Britt along to save her life since Cyrus’s spy has told him how much time she is spending with Jason. How close will Jason and Britt get while staying in the safe house together?

General Hospital’s Damien Spinelli (Bradford Anderson) will receive a summons. Spinelli will meet a new man named Vincent Novak. There is some speculation that this could be Roger Howarth’s new character. Will Spinelli end up working for Mr. Novak?

General Hospital’s Brando Corbin (Johnny Wactor) will realize something is bothering his new love interest, Sasha Gilmore (Sofia Mattsson), and ask what is going on with her. Of course, spoilers indicate that Cyrus is going to get jealous of this budding romance, probably thanks to Gladys Corbin (Bonnie Burroughs). Will Brando and Sasha have to break up to stay safe?

General Hospitals Jasper Jacks (Ingo Rademacher) worries about Carly Corinthos as she gets deeper into mob activity. Jason needs to be at the meeting of the five families but needs to keep himself safe. Carly is about to be MIA while trying to help Jason with his escape. However, Carly will begin to feel helpless as Jason cannot help her and Sonny Corinthos (Maurice Benard) is gone. Can Carly survive their absence?

General Hospital’s Jordan Ashford (Briana Nicole Henry) will take the lead on Jason’s case. Of course, if it’s like a lot of other cases, Jason has years to run before he’s discovered. However, look for Cyrus to pressure Jordan for answers.

General Hospital’s Portia Robinson (Brook Kerr) will check on Curtis Ashford (Donnell Turner) and the two of them could grow closer. Will Portia and Curtis pick up where they left off years ago?

Brook Lynn and Maxie’s plan will hit a snag that may have nothing to do with Britt’s disappearance. Valentin Cassadine (James Patrick Stuart) will question Anna Devane’s (Finola Hughes) decisions. Meanwhile, Peter and Cyrus will meet up and discuss the current situation.