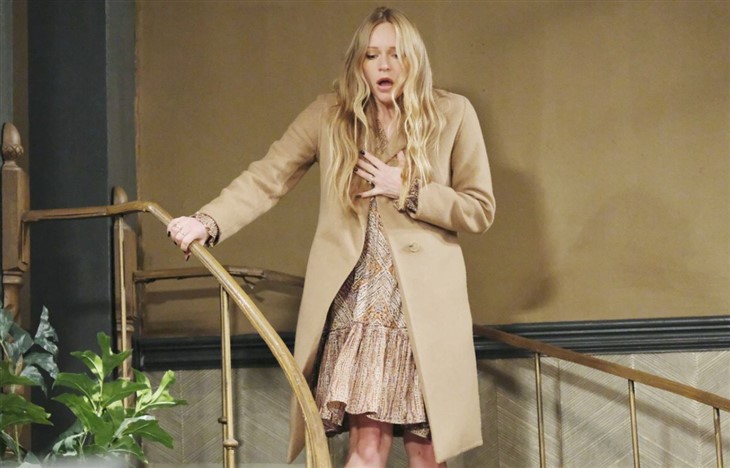 Days of Our Lives spoilers tease that Abigail DiMera (Marci Miller) will deny Gwen Rizchech’s (Emily O’Brien) accusations that she pushed her down the stairs on purpose in an upcoming episode of Days of Our Lives!

Days of Our Lives viewers will remember that Gwen actually miscarried before coming to the DiMera mansion, where she had intended to tell Chad DiMera (Billy Flynn) and later his and Abigail’s father, Jack Deveraux (Matthew Ashford). As she was packing her things to move out of the Salem Inn into the Horton house, where she was going to move in at Jack’s invitation, she started experiencing pains. She wondered if she was having Braxton-Hicks contractions, and made her way to the emergency room of Salem University Hospital right away, where she encountered Dr. Snyder (Michael Lowry) who took her right back.

Unfortunately, just the day after she had an ultrasound with Dr. Kayla Johnson (Mary Beth Evans), Dr. Snyder confirmed that she had lost the baby. Gwen was told she would need a dilation and curettage (D & C) and a nurse would call with an appointment time. As Days Of Our Lives viewers will recall, Gwen headed over to the DiMera mansion but ran into Abigail first. Abigail was livid that she was moving into her family home with their father, and even more livid that Gwen had not gotten an abortion, as Abigail had demanded!

Gwen had gone upstairs looking for Chad and Abigail was even more livid that she was looking for her husband! Abigail spewed vitriol against Gwen and Gwen couldn’t even get away from her, and as she tried to flee down the stairs, Abigail followed right behind and grabbed her wrist! Abigail finally let go and down tumbled Gwen down the stairs! From the view that Chad and Jack, who had come into the foyer from another room were treated to, it absolutely looked like Abigail had pushed Gwen down the stairs!

Days of Our Lives viewers will recall Chad and Jack rushed to Gwen’s side, as she lay on her stomach on the floor at the bottom of the stairs! A hard landing on the stomach of a pregnant woman in the second trimester can only mean disaster, and Abigail should know that! Jack and Chad rush an unconscious Gwen back to Salem University Hospital, and when she awakens she tells Chad that Abigail pushed her, causing her to lose the baby!

Days of Our Lives viewers will see Chad that will support Gwen and even come to her defense, as he is truly grieved that the baby died. He wonders what the child would be like, and what would have happened had she survived, Gwen undoubtedly telling him the baby was a girl. Abigail will simply be left out of the picture with all the attention on Gwen, both from her husband and her father! Even though the baby was already lost before the accident on the stairs, Gwen will take advantage of the opportunity in her devastation to blame Abigail for the miscarriage, and Chad and Jack will both believe it because of how it looked from where they stood when it happened!