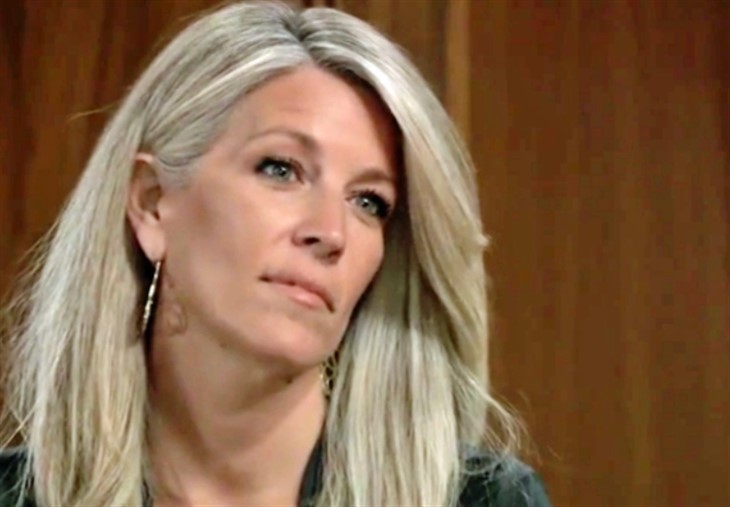 General Hospital viewers will recall from Friday’s episode that Carly had everything set up to ensure no interference from Cyrus Renault (Jeff Kober). Ava Jerome Cassadine (Maura West) had come over to Carly’s house while Laura Collins (Genie Francis) was there talking to her. Ava was worried for Avery Corinthos (Ava and Grace Scarola) after Cyrus had come to Wyndemere and made what she construed as a threat against Avery.

Laura was enraged and Carly was upset, and decided the three of them did need to work together to take down Cyrus! Carly came up with the idea of a family dinner, inviting Martin Grey (Michael E. Knight) and Laura, telling Ava to invite Cyrus to Wyndemere since Nikolas Cassadine (Marcus Coloma) is his half-nephew, Laura being his half-sister. Laura pouted when Carly said she had to be there but said she would be. The plan was to ensure Cyrus was distracted, hopefully, happy to be invited by the family, and nowhere near General Hospital!

General Hospital viewers will recall that Carly met with Brick (Stephen A. Smith) in a recent episode talking about the Cyrus situation and how to get Jason to the Five Families meeting. Now it’s come down to the wire, with Cyrus sufficiently distracted – as far as anyone knows – and she checks with Brick and Damian Spinelli (Bradford Anderson) to see if their parts of the puzzle are in place. She is in the Corinthos compound when she calls Brick, who is out in his car near General Hospital. She asks if he is in position, and he confirms that he is set. She walks towards Spinelli, who is sitting on the couch in the living room in the Corinthos home to ask if the garage cameras at the hospital are disabled.

He says yes but then launches into his usual long rambling diatribe, saying he bypassed General Hospital’s computer firewall, with ease, he might add, as he grins and says this is even after the precautions they took after the breach — Carly pointedly says “SPINELLI” and he says “what – oh, sorry!” He continues to describe what he did hacking into the General Hospital computer system and tells her that they – she – will be the only ones to see what is going on in real time, and all that General Hospital security would see would be looped footage from two days ago. Spinelli reiterates that no one will see what they are doing, there will be no evidence of Jason’s “elopement” from custody.

Brick chimes in, asking what about on the inside. Carly says they’re good – one of their men is inside posing as an orderly, and he is going to take care of the guard posted outside of Jason’s hospital room door by Pentonville Prison. Spinelli, confused, tells Carly he thought he was one of theirs. Carly confirms he was – then he wasn’t! Brick chimes in again, saying ok then, everything’s ready – until it isn’t! He sees something that makes him shake his head and say “oh damn!” Spinelli says “oh no”! Carly, nervous, asks what! Brick says “Good evening, Commissioner” as Jordan Ashford (Briana Nicole Henry) sticks her head in his car window and her nose where it doesn’t belong!